It’s Not Just USPS: Trump is Hijacking the Park Service to Boost His Re-Election, Too

Trump’s assault on the Postal Service has rightly made headlines, and prompted fear that he is using a federal agency to benefit his re-election effort by installing a loyalist donor who is limiting access to vote-by-mail and slowing down mail service.

But Trump’s hijacking of government agencies to support his campaign goes beyond USPS to another beloved American institution: the National Park Service. Trump’s use of national parks and monuments has mostly been reported as individual instances of the president shrugging off norms (and in some cases laws) to put on a good show; but put together, they start to look like a concerted effort to use the park service to boost Trump’s reelection.

It all started with Trump’s notorious “Salute to America” event last Fourth of July on the National Mall, an expensive event with fireworks, military planes, tanks and a large audience. Trump tasked Interior Secretary Bernhardt (who oversees the park service) with planning the event. Bernhardt delivered, even diverted $2.5 million in park service fees (federal funds) to help pay for the event. Trump was pleased enough with it (and perhaps the spiking rates at his nearby hotel) that he reprised the event this year, in the middle of a pandemic, ignoring warnings of the public health risk it would cause.

As the election has gotten closer, Trump’s use of the park service has escalated. In May, Trump decided he wanted to be interviewed on Fox News from inside the Lincoln Memorial, which no president had previously done. The park service changed its rules to allow the interview.

Then in July, Trump held not only his second “Salute to America,” but also a speech and fireworks display at Mount Rushmore, which required the park service to change another policy. In 2009, the park service stopped putting on fireworks at Mount Rushmore because of pollution and wildfire risk in the Black Hills. But this year, the Trump-endorsed governor of South Dakota and the Interior Department reportedly worked together to ensure that there would be the fireworks Trump wanted, and in April the park service released a report saying that there would not be a significant environmental impact, clearing the way for the fireworks show.

But Trump’s corruption of the park service goes beyond policy reversals, and extends into outright propaganda. Just a few weeks ago the Interior Department (which the park service is a part of) released a video about President Trump, touting him as a protector of the great outdoors, which appears to have been an illegal use of taxpayer funds.

And now, Trump is attempting to use federal lands administered by the park service to accept the Republican nomination for president. The White House grounds like the Rose Garden are a national park managed by the Park Service. He considered the NPS site at Gettysburg , but ultimately chose the potent political message of delivering his speech from the White House. Delivering a partisan speech from the White House puts every staff member at risk of violating ethics law, but rather than try to avoid an appearance that he is trying to use his government power to put on a reelection spectacle, Trump has doubled down.

The RNC requested permission from NPS to put on a firework show at the Washington Monument following Trump’s acceptance speech at the White House. Not only that, but the RNC also reportedly asked to film the show, setting the stage for quite the campaign ad. If the park service accepts the RNC’s proposal, they will be green-lighting a political spectacle unlike anything we have seen before: fireworks on the National Mall, right in front of the White House, timed to coincide with Trump’s political convention speech, and all of it will be filmed to use as the RNC sees fit. What other candidate could secure such a spectacle?

Perhaps it is merely a coincidence that Trump has recently expressed his appreciation of the park service, donating his quarterly salary to the agency to “repair and restore national monuments.”

For the entirety of Trump’s administration, the park service has been without a permanent leader, and just two weeks ago, the acting director resigned. That leaves Margaret Everson, a former Ducks Unlimited lobbyist in charge, though she will also be serving in an acting capacity. Perhaps the leadership vacancy at the agency has left it more vulnerable to political pressure. But not having a permanent director is no excuse for the park service creating propaganda for Trump, helping to fund a political rally on the Mall, and offering picturesque backgrounds for political interviews and speeches.

No agency within the federal government should be allowed to act like a wing of the Trump campaign, whether it is led by a loyalist donor, or whether it has gone more than three years without a permanent leader. 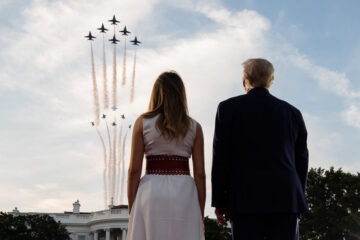 The National Park Service may have violated federal law by using taxpayer money to create what looks like a campaign ad for President Trump.