Following his election, President Trump began establishing several independent advisory councils made up of some of America’s most influential business leaders. Before being disbanded in August, these councils were tasked with advising the president on the best ways to ensure that the American private sector flourished, and on strategies for modernizing the federal government. The Strategic and Policy Forum, established December 2, 2016 and chaired by Blackstone CEO Stephen Schwarzman, was a group of business executives and directors tasked with advising the president on the impacts of his policy initiatives to “bring back [American]  jobs,” and ensure the growth of the economy. The American Manufacturing Council, established on January 27, 2017 and chaired by Dow Chemical CEO Andrew Liveris, was comprised of senior executives that were advising the president on his “Manufacturing Jobs Initiative.” And the American Technology Council, officially comprised of members of the Cabinet and White House staffers, formally recruited technology-sector executives to advise the president and his staff on strategies for modernizing the federal government’s technology infrastructure.

While these councils provided one channel for some of America’s most powerful CEOs to influence government policy and decision-making, their dissolution is unlikely to leave their companies without a voice in Washington. In fact, according to a CREW analysis of lobbying disclosures for the first half of 2017, companies affiliated with the Strategic and Policy Forum, the American Manufacturing Council, and consultants to the American Technology Council spent almost $152 million lobbying the federal government.

To determine how much organizations represented on President Trump’s advisory councils spent on lobbying in the first half of the year, CREW first identified members of the Strategic and Policy Forum, the American Manufacturing Council, and the consultants to the American Technology Council by reviewing a Blackstone Group press release; transcripts and statements released by the White House; an executive order and a Business Insider report; and reports by CNBC and Citizen Vox. CREW then reviewed first and second quarter lobbying disclosures for the 62 companies and interest groups affiliated with members of these councils. CREW found that 54 of these entities reported lobbying in the first half of 2017. This includes money spent on in-house lobbyists and contracting with lobbying firms. These groups lobbied at least 85 executive branch offices and agencies, as well as both chambers of Congress and the White House in the first two quarters of 2017.

Of the 54 companies and interest groups affiliated with these advisory councils that reported lobbying during the first half of 2017, the top 5 spenders were Google (the primary subsidiary of Alphabet Inc.), Boeing, Lockheed Martin, Dow Chemical, and Amazon. Combined, these five entities spent $46 million, with Google and Boeing spending more than $10 million each to try to influence Congress and at least 40 different offices or agencies in the executive branch. Thirty other council-affiliated companies spent more than $1 million individually across this time period.

Presidential Advisory Council Members Whose Companies Spent the Most on Lobbying During the First Half of 2017 (CREW’s October 23, 2017 analysis of the Senate Lobbying Database for 01/2017 – 07/2017)

Alphabet subsidiary Google spent $11,562,500 on lobbying during the first half of 2017, more than any other company affiliated with these presidential advisory councils. The company also contributed $285,000 to President Trump’s inaugural committee. Alphabet executive Eric Schmidt met with the president once in December 2016, and attended a meeting of the American Technology Council in June. Schmidt was not officially a member of the American Technology Council, as it was comprised of Cabinet officials and White House staff, but he was formally invited to advise the president via the council. Indeed, the tech website Recode described Schmidt as “Google’s primary emissary to the White House,” since he appears to be the Alphabet executive who engaged it the most. Simultaneously, Google was lobbying Capitol Hill and the White House on issues that were reportedly discussed at the June American Technology Council meeting, including “cybersecurity” and “H-1B visas.”

Current Boeing Company executive Dennis Muilenburg and former Boeing executive Jim McNerney met with President Trump at least 2 times each since December 2016. Muilenburg was a member of the president’s American Manufacturing Council, while McNerney sat on the president’s Strategic and Policy Forum. Muilenburg stated that his meetings with President Trump were on business-related issues, while the Strategic and Policy Forum meetings that McNerney attended were intended to address how government policy affects the private sector with the president. Notably, while the White House was mired in controversy over President Trump’s Charlottesville remarks, Muilenberg made clear that he was willing to stay on the president’s council to continue to make headway on manufacturing issues.

And during the first half of 2017, Boeing spent $10,380,000 lobbying both chambers of Congress, the Federal Aviation Administration (FAA), the Department of Transportation (DOT), the Department of Defense (DOD), the White House, and ten other executive agencies and offices. Some of the issues that they focused on through their in-house lobbying efforts included “Acquisition Policy,” “Arms Sales,” and employer responsibility laws. The company also contributed $1 million to President Trump’s inaugural committee. 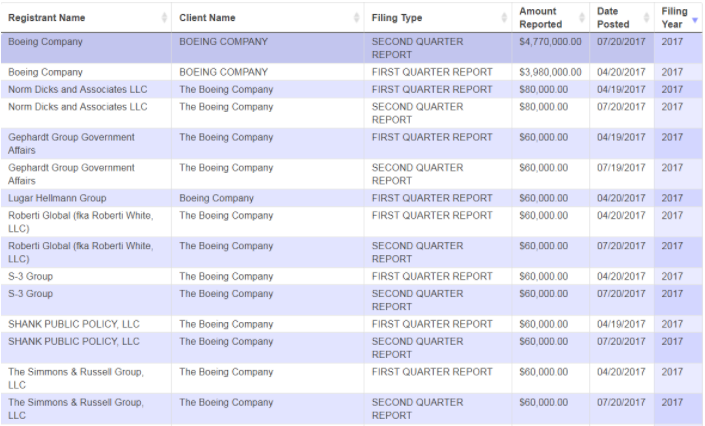 Lockheed Martin CEO Marillyn Hewson also sat on the president’s American Manufacturing Council. Hewson met with President Trump at least 5 times between January and June 2017, and has complimented the president for his negotiation skills regarding her company’s pending F-35 contracts with the government. President Trump has mentioned Lockheed Martin’s F-35 fighter jet multiple times, occasionally bragging about its fighting prowess, but especially talking about how much money the government saved on the plane. In November 2016, then-president-elect Trump criticized Lockheed via Twitter over the cost of the company’s F-35 contracts with the federal government. Lockheed’s stocks subsequently fell.

Lockheed spent $8,798,900 lobbying at least 11 different federal agencies, the White House, and Congress during the first half of 2017. The company primarily lobbied on the National Defense Authorization Act and Department of Defense appropriations, both of which affect the company’s ability to sell its products. In July 2017, Lockheed was awarded interim contracts for the F-35 jets, and its stocks have rebounded over the last 8 months.

Dow Chemical Company CEO Andrew Liveris also sat on President Trump’s American Manufacturing Council. Liveris met with the president at least 5 times since December 2016 and was present at President Trump’s February signing of an executive order aimed at reducing the number of federal regulations on companies like Dow. The company scored another policy victory in March when the Trump administration opted not to ban some of the chemicals that it sells, despite studies confirming their serious danger to public health.

Dow Chemical spent $7,950,000 on lobbying in the first half of the year, and donated $1 million to President Trump’s inaugural committee. Dow lobbied six different executive offices and agencies, in addition to both chambers of Congress and the White House, on environmental regulations and energy policy. Specifically, much of its lobbying focused on seeking approval for some of its pesticides, pending tax treaties, and the expansion of trade (with Kazakhstan, for example). 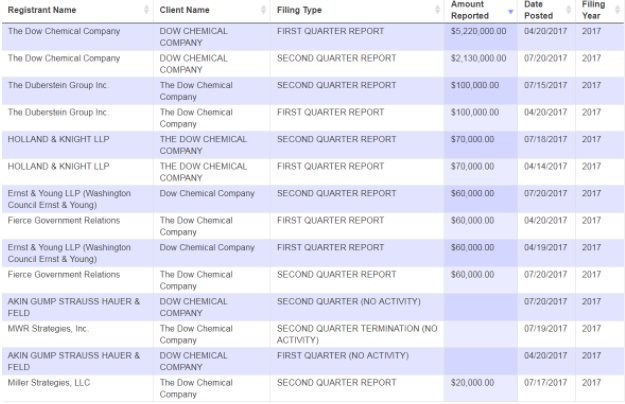 Jeff Bezos, CEO of Amazon Inc., met with President Trump twice — once at Trump Tower in New York in December, and a second time through the American Technology Council meeting in June. Like Google Executive Chairman Eric Schmidt, Bezos discussed the state of the federal government’s technology infrastructure with President Trump and Cabinet officials, in addition to strategies for modernizing it. Amazon contributed almost $58,000 to President Trump’s inaugural committee, and in the first 6 months of 2017, the company spent $7,580,000 lobbying 29 different executive agencies and offices, as well as both chambers of Congress and the White House. Some of the issues that Amazon lobbied on included licensing, patenting, and copyrighting, as well as “cybersecurity” and “federal IT modernization” through its in-house lobbyists — issues that were discussed at the White House during the American Technology Council meeting in June.

While President Trump’s advisory councils largely disbanded in August, following the president’s remarks about the violence in Charlottesville, a quick look at the lobbying data clearly demonstrates that council-affiliated companies continue to wield significant influence in Washington. Indeed, just those companies represented on three of these advisory councils spent in excess of $150 million on lobbying in half a year. Whether corporate executives chose to serve on these councils out of a sense of duty to country, or simply to gain additional access to high-level decision-makers, one thing is clear: their companies continued to spend millions of dollars to influence federal policy benefitting their bottom lines. 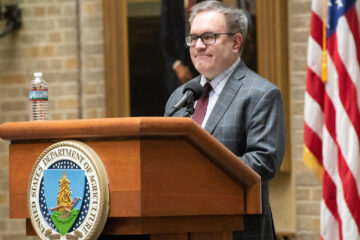 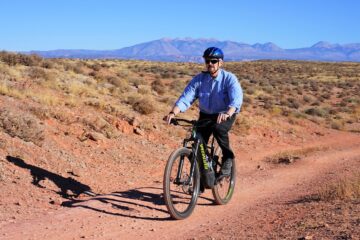 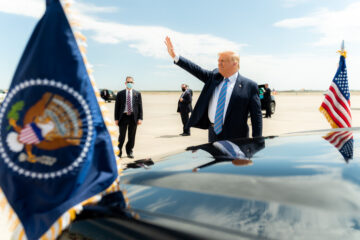