Washington— Department of the Interior Secretary David Bernhardt and his staff appear to have violated the Federal Records Act (FRA) by intentionally failing to create and maintain documents about the Secretary’s daily schedule as well as details related to meetings with industry lobbyists, according to a complaint filed today by Citizens for Responsibility and Ethics in Washington (CREW) with the Office of Inspector General at the Department of Interior.

“[Bernhardt’s] refusal to create records fully documenting his meetings and daily schedules conflicts directly with his duty under the FRA to ‘make and preserve records’ documenting his actions as Secretary of the Interior,” the complaint reads. “Even more troubling, the exclusion of Secretary Bernhardt’s controversial meetings with industry representatives reportedly is intentional. Rather than spell out the details of Secretary Bernhardt’s schedule, his staff ‘intentionally left controversial meetings with representatives of fossil fuel, timber and water interests off his public calendar, citing ‘internal protocol’ governing his schedules’.” 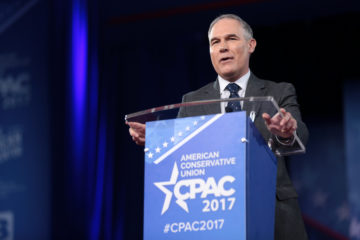 “It appears EPA Administrator Pruitt has operated in secrecy to avoid creating an adequate record of his and the EPA’s actions.”