Washington, D.C. — Today, Citizens for Responsibility and Ethics in Washington (CREW) released a new report, Mine, Mine, Mine, detailing the influence of the mining industry and its main trade organization, the National Mining Association (NMA), which represents more than 300 companies.

CREW found the NMA spent $4.8 million lobbying in 2012, more than four times what it spent in 2000. Campaign contributions through the NMA’s two political action committees (PACs), COALPAC and MINEPAC, have more than doubled over the past 10 years.

The PACs, funded by donations from some of the country’s biggest mining companies, contributed a combined $915,000 to federal candidates, parties, and other political committees during the 2012 presidential election cycle, an increase of nearly 30 percent over the 2008 cycle. Efforts are underway to revamp the General Mining Act of 1872 to require mining companies, which currently pay no royalties, to potentially pay the same 12.5 percent in royalties required of oil companies.

Estimates of the potential revenue range from hundreds of millions of dollars over the next decade to as much as $2 billion annually. In fiscal year 2011, the value of minerals extracted from federal land was estimated at more than $6.4 billion.

CREW Executive Director Melanie Sloan stated, “The federal giveaway to the mining industry would be an outrage at any time, but it is ironic that even in light of the current budget debacle, Congress can’t agree to scrap an 1872 law preventing the government from raising hundreds of millions — if not billions — of dollars in revenue.” 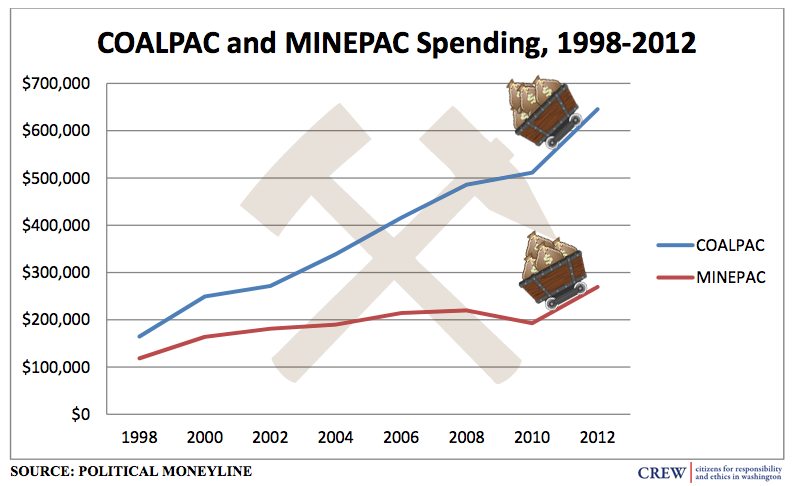 The biggest congressional recipient of NMA PAC contributions over the past three election cycles was House Speaker John Boehner (R-OH), who received $42,500. House Majority Leader Eric Cantor (R-VA), the second largest recipient, got $27,000. House Republicans have sided with the NMA on key votes. In 2007, the NMA opposed legislation to charge a royalty fee on minerals extracted from federal land.

Reps. Boehner and Cantor, together with 82 percent of House Republicans, voted against the measure, which ultimately died in the Senate. Rep. Boehner spoke out aggressively against the legislation.

Nevada Sen. Dean Heller (R) was the third largest recipient, taking in $26,000, and Senate Majority Leader Harry Reid (D-NV), the fourth largest recipient, received $25,000. Sen. Reid received contributions from MINEPAC but not COALPAC, as opposed to the other top recipients of NMA money, who received contributions from both PACs. Sen. Reid was one of just two Democrats among the NMA’s top twenty congressional recipients, with the other being Sen. Joe Manchin (D-WV).

Additionally, the mining industry as a whole spent $32,176,168 on lobbying in 2012. While mining can be an expensive business, the industry’s lobbying and campaign contributions prove it can clearly afford to keep drilling Washington for all it’s worth.