Omar Navarro, a Republican candidate running for the U.S. House in California, held a fundraiser at the Trump National Golf Club – Los Angeles. Former Trump campaign adviser Roger Stone, who Mr. Navarro described as his political strategist, also made an appearance at the fundraiser. According to a Facebook post advertising the event, a minimum donation of $100 was required for admission. Donors could get their photo taken with Mr. Navarro and Mr. Stone for a $200 contribution. 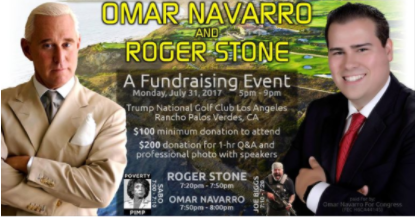