Newsweek reported that Small Business Administration (SBA) staffers tried to avoid publicizing images of SBA head Linda McMahon speaking at an industry event at the Trump International Hotel – Washington, D.C. McMahon spoke at an event hosted by the Louisiana Association of Business and Industry. In a text message exchange between two SBA staffers that included a photo of McMahon, one wrote “can you try to get the portrait mode one without the ‘Trump hotel’ sign in it?” One of the staffers received another text message: “I’ll tweet with excerpts from speech…and crop the opulence out!” 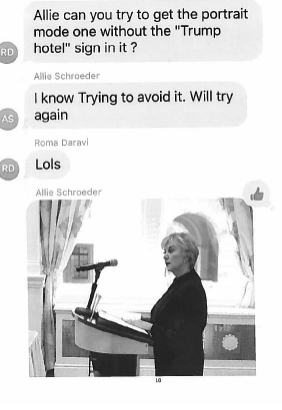