At a press briefing White House Press Secretary Sean Spicer was asked about President Trump’s meeting with former Colombian Presidents Alvaro Uribe and Andres Pastrana at Mar-a-Lago, which the reporter noted may have been set up by Senator Marco Rubio’s (R-FL) office. Mr. Spicer said he was “unaware of the circumstances of that.” Senator Marco Rubio later denied setting up the meeting. 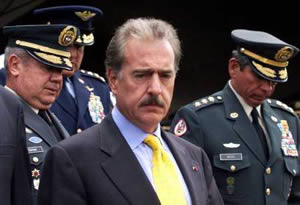