CNN reported that @GenderAtState, an official State Department Twitter account, retweeted a tweet from Assistant to the President Ivanka Trump’s personal Twitter account promoting her new book, “Women Who Work.” While Ms. Trump avoided a publicity tour for the book, citing the appearance of an ethical conflict, her lawyer said the Office of Government Ethics had approved Ms. Trump’s use of personal social media accounts to talk about the book. The retweet was soon deleted from the State Department account. CNN reached out to the State Department, but they did not comment. 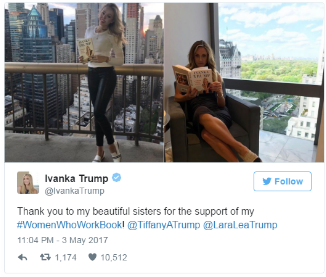