Evidence released during the trial of an insurance mogul, who was convicted last month on public corruption and bribery charges in North Carolina, indicates that he made previously unknown six-figure contributions in 2018 to two politically-active nonprofits that are associated with the Democratic and Republican leadership in Congress.

Emails brought to light during the trial describe financial commitments made by the executive, Greg Lindberg, to Majority Forward and the American Action Network—two groups that have spent millions in elections without disclosing their donors—and a nonprofit his team set up that reported giving $150,000 to those same two groups.

None of the evidence suggests these particular contributions were part of a bribery scheme similar to the one that led to Lindberg’s conviction. But the contributions underscore concerns about transparency and the potential for undue influence that arise when donors like Lindberg can give to politically-active nonprofits that benefit elected officials while keeping the donations secret.

As section 501(c)(4) social welfare organizations, Majority Forward and the American Action Network are not required to disclose their donors. The two groups, which are both affiliated with super PACs, are part of the wave of dark money groups that have “flooded elections” with nearly $1 billion in outside spending since the Supreme Court’s Citizens United ruling a decade ago. While their primary activity cannot be influencing elections, under rules governing 501(c)(4) organizations, both groups have still spent many millions of dollars on ads and other communications targeting candidates in recent years.

In the Citizens United case, the Supreme Court’s majority reasoned that spending by a group that is “independent” of a candidate or campaign could not “give rise to corruption or the appearance of corruption” and that there was “only scant evidence that independent expenditures even ingratiate” the sources of the spending with the politicians that benefit from it. To the contrary, the facts that led to Lindberg’s conviction for bribery, outlined below, provide abundant evidence that supposedly independent spending groups can be, and indeed are, used as vehicles for quid pro quo corruption.

On March 5, 2020, a federal jury convicted Lindberg of public corruption and bribery. Specifically, he and his associates offered millions in campaign support to North Carolina Insurance Commissioner Mike Causey in exchange for the removal of an insurance commission official who oversaw Lindberg’s company, Global Bankers Insurance Group. Lindberg agreed to support Causey (who cooperated with law enforcement) in several ways, including routing $250,000 directly to Causey’s campaign through the North Carolina Republican Party and by funding outside groups that would spend money to benefit Causey’s re-election.

In particular, Lindberg directed the funding of two corporate entities to boost Causey. The first was an independent expenditure committee called the North Carolina Growth and Prosperity Committee, which could spend all its money on politics and had to disclose its donors. The second was a section 501(c)(4) organization called the North Carolina Growth and Prosperity Alliance, which could keep its donors secret but could not spend more than half of its budget on express political advocacy. Both groups were overseen by John Palermo, who worked for one of Lindberg’s companies. Palermo was also charged in the case, but the jury found him not guilty.

“A Wider World of Intrigue”

As WRAL’s Travis Fain reported, evidence released in the case “hints at a wider world of intrigue” in Lindberg’s political giving “than even his $5.5 million in documented political donations previously revealed.” In one example, Fain flagged a June 2018 email exchange between Lindberg and Rod Perkins, who lobbied for Lindberg’s company, in which Lindberg declared, “We are shutting down donations until we see some improvement at NC DOI staff,” an apparent reference to changes he was trying to get Causey to make at the North Carolina Department of Insurance.

Perkins followed up to ask if that meant Lindberg’s operation would “still honor the commitments we already made and communicated at the National level based on your prior approval to proceed,” citing commitments to the National Republican Senatorial Committee (NRSC), the Democratic Senatorial Campaign Committee (DSCC), the American Action Network, and Majority Forward.

Excerpt from June 29, 2018 email from Rod Perkins to Greg Lindberg and others.

In response, Lindberg told Perkins, “we aren’t writing ANY more checks to anyone until we see improvement at NC DOI.” He added that he wanted Perkins to “Pass the word to all NC GOP leaders.”

By July 2018, however, Lindberg appears to have changed his mind about withholding the federal donations he had committed to make. In a July 9, 2018 text exchange between Palermo and John Gray, a company consultant who was convicted of public corruption and bribery along with Lindberg, Palermo told Gray that Lindberg “released the federal donations today btw.”

According to FEC records, both the DSCC and the NRSC reported receiving contributions from Lindberg on July 11, 2018 that matched the amounts in Perkins’s June email. Both party committees received $33,900 that day, and the NRSC also reported receiving an additional $1,100 from Lindberg to its “legal proceedings account,” bringing its total to $35,000.

It is unclear if Palermo’s comment that Lindberg had “released the federal donations” also referred to Lindberg’s commitments to American Action Network and Majority Forward. But contextual clues in the text conversation, other communications, and public records suggest he may have been, and that the spending went through a 501(c)(4) called American Growth and Opportunity Alliance (AGOA) that Palermo and Lindberg had set up a few months earlier.

The text conversation and later communications appear to link Lindberg’s spending to AGOA. Just before he mentions authorizing the federal donations, Palermo asked Gray if Lindberg was going to hold up contributions until he got what he wanted from the insurance commissioner. As an example of the type of contributions he was talking about, Palmero cited Barbara Jackson, a North Carolina Supreme Court justice up for re-election. 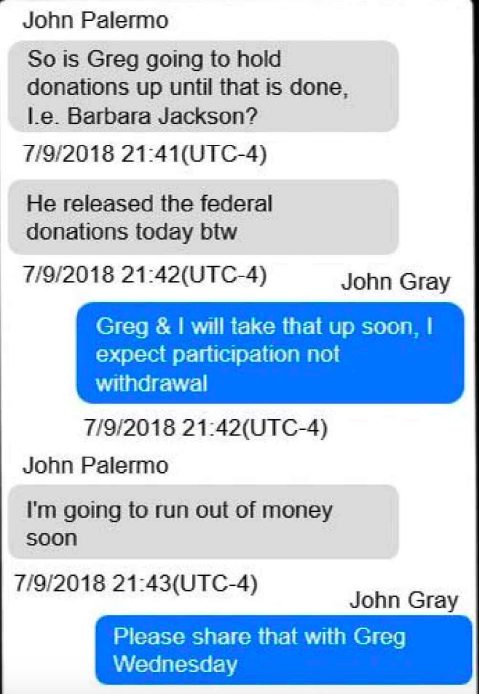 Excerpt from July 9, 2018 texts between John Gray and John Palermo

A little more than a week after the text exchange, Palermo emailed Lindberg to discuss several issues, including a conversation with Gray about the “importance of supporting” Jackson, which Palermo said a failure to do could result in “a Supreme Court that is no longer pro-business, and one that those who are, cannot count on it for support.”

Palermo then reminded Lindberg that he had “approved funding for AGOA, our C(4), which is all non-disclosed, to run a campaign supporting Barbara.” Palermo said he was asking for Lindberg to “continue to move down the path we set in May and continue to fund the AGOA, our C(4).”

AGOA was incorporated in Delaware on May 9, 2018. Later that month, Palermo applied for the new nonprofit to conduct business in North Carolina.

In a May 25, 2018 email, Palermo updated Lindberg “on the Super PAC & 501 C4 Activity,” describing AGOA as “[o]ur new 501 C4.” He also told Lindberg that Gray had indicated Lindberg’s support for a proposal “to use this entity as a way to support Barbara Jackson.”

As an “action” item, Palermo wrote that Lindberg should “make out an initial funding check for $120,000 to American Growth and Opportunity Alliance and deliver to me so that I can set up the bank account.” Palermo suggested in the email that he would also ask for “a check at the beginning of the following 4 months in the amount of $100,000 to fund the remainder of the activities to support Barbara Jackson.”

Excerpt from May 25, 2018 email from John Palermo to Greg Lindberg and John Gray

A few days later, Lindberg instructed one of his employees to “cut the personal checks” requested by Palermo.

As part of its application to do business in North Carolina, AGOA submitted a “preliminary” 2018 budget to the state, detailing both its fundraising and spending expectations. With an expectation of $670,000 in revenue, including $520,000 in “individual donations” that appears to match the amount Palermo requested Lindberg give to the group, AGOA planned to spend $525,000 on media production and placement, which would presumably include efforts to support Jackson.

It appears that something changed, however, and AGOA’s resources were not significantly dedicated to supporting Jackson. The group’s 2018 tax return shows that it only raised $420,000 in 2018 and it only reported spending a little more than $40,000 on anything that could be considered media. The bulk of AGOA’s spending instead was $300,000 in grants to Majority Forward and the American Action Network, which each received $150,000.

Both of the nonprofits Lindberg seemingly funded through AGOA have been described by news outlets as  closely aligned with top leaders in the Democratic and Republican parties. The evidence released in the case, however, does not indicate why Lindberg made the contributions, who solicited them, or if he wanted anything in return.

Though the $150,000 each that AGOA gave Majority Forward and the American Action Network can apparently be traced back to Lindberg thanks to court records from his bribery prosecution, the vast majority of the dark money groups’ contributors remain unknown to the public. On their most recently available tax returns, which cover mid-2017 through mid-2018, Majority Forward reported raising more than $27 million while the American Action Network reported raising more than $51 million.

But just because the public is denied knowledge of a dark money group’s funders, that doesn’t necessarily mean they are unknown to the politicians who benefit from their spending. Evidence from Lindberg’s trial revealed, for instance, that he and his associates explicitly told Causey that Lindberg would put “a million in the (c)4” that could dedicate 40 percent of its expenses to “direct campaigning” for Causey while doing “a lot of positive stuff” for him with the rest of the money.

Despite what the Supreme Court’s majority in the Citizens United case may have thought, Lindberg’s conviction shows that the potential for undue influence via large contributions to “independent” political groups, particularly ones that are not required to disclose their donors, is all too real.