President Donald Trump tried to use a foreign government to influence the 2020 election. In doing so, he committed the highest crime: he attempted to deprive the people of the United States of their right to a free and fair election. He has clearly committed numerous impeachable offenses, but this specific offense–attempting to deprive the people of their right to a free and fair election–left the House of Representatives with no real choice but to use their constitutional power of last resort to consider his removal. His conduct shows that he thinks he is above the law and that he can abuse the powers of his office with impunity.

It is also appropriately of great interest to Americans whether, quite apart from constitutional high crimes, the President committed ordinary crimes for which ordinary Americans could be prosecuted and punished. An analysis of the facts and the law reveals that, in addition to his impeachable conduct, President Trump likely committed several criminal offenses. Any other person could be facing the real likelihood of substantial time in federal prison. Instead, because Donald Trump holds the office of President, he faces potential impeachment rather than potential indictment. But to be clear: in our constitutional republic no person, including the President, is above the law.

The Constitution provides that a President “shall be removed from Office on Impeachment for, and Conviction of, Treason, Bribery, or other high Crimes and Misdemeanors.” Impeachment does not require proof of a crime; Presidents Nixon and Clinton both faced articles of impeachment that incorporated some conduct that was not squarely prohibited by criminal laws. But the fact that a President’s conduct likely broke criminal laws is hardly irrelevant–our criminal laws are an articulation of our country’s values, and the Constitution’s use of the words “bribery” and “high Crimes and Misdemeanors” was intended to require an abuse of power as serious as a criminal offense.

Public reporting and the impeachment inquiry being conducted in the United States House of Representatives have produced thousands of pages of witness testimony and documentary evidence showing that President Trump, directly and by and through his associates, pressured the government of Ukraine to announce investigations of Joe Biden, his political rival, and withheld duly appropriated security assistance and high-level diplomatic meetings until Ukraine did so.

This evidence strongly supports the conclusion that Donald Trump committed crimes like bribery and misappropriation of funds. These are crimes for which most Americans would be prosecuted and for which they could go to prison. Because Trump, a sitting president, cannot be indicted, all Americans must decide whether his criminal conduct merits the most serious punishment he can face: impeachment and removal from office. 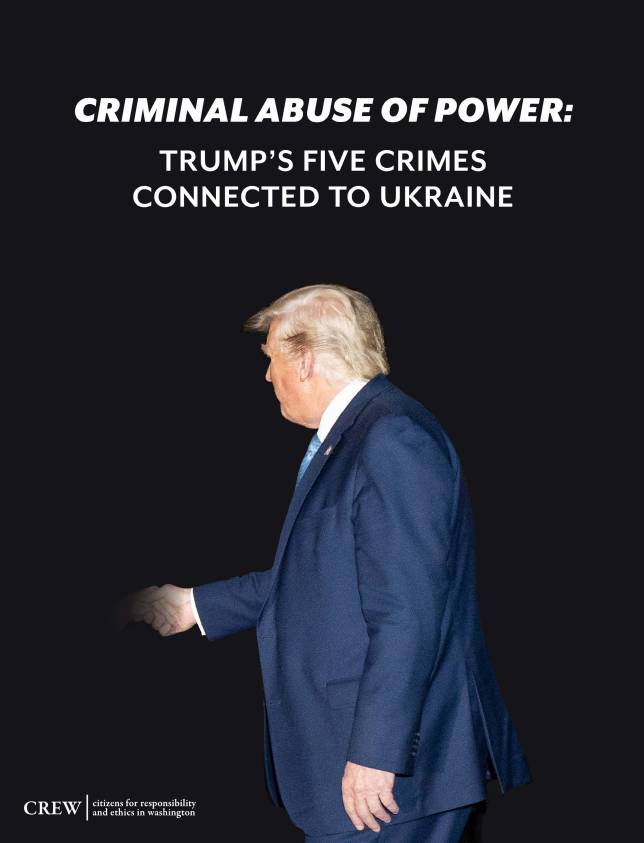