When President Trump removed Glenn Fine from his Acting Inspector General post at the Department of Defense and replaced him with the Inspector General of EPA, Sean O’Donnell, the American public responded with shock, disbelief and confusion. New records obtained by CREW show that high ranking officials at EPA had the same response.

Eighty-three pages of correspondence illustrate an agency watchdog caught off guard, with next to no warning from the White House, coming up with plans on the fly. Not only had Trump weakened oversight of both EPA and DOD, he effectively removed Fine as Chair of the Pandemic Response Accountability Committee (PRAC), creating a void of leadership overseeing the government’s coronavirus response. As a pandemic grips the nation, and the massive governmentwide relief effort including EPA and  DOD faces scrutiny over policy rollbacks and misuse of taxpayer funds, none of these IG offices has a leader that can devote their full energy to oversight of its programs.

On March 30, 2020, Fine was appointed to serve as the chair of the PRAC, which Congress created to prevent and detect abuse of federal coronavirus funds. On April 7, a week after Fine’s appointment, news broke that Trump had named O’Donnell to serve as Acting DOD IG, effectively removing Fine from his coronavirus oversight position. Meanwhile, O’Donnell would serve as both EPA IG and acting DOD IG, effective immediately.

Records show Fine and O’Donnell spoke the day before the news broke, which appears to have been when O’Donnell assumed the role. Fine sent an email to his staff the following morning, clarifying “I remain the Principal Deputy Inspector General as we continue to work to achieve the important mission of the DoD IG,” and saying “We all need to support Mr. O’Donnell in his role as the Acting DoD IG and remain focused on the important work of the office.” O’Donnell also sent an email, which he asked Fine to review, that struck a similar note: “My commitment to you is to work with PDIG Fine to minimize distractions and continue your good work.” Fine resigned from the government altogether in June.

However, senior staff at EPA OIG appeared lost. For example, a senior auditor asked, “I just happen[ed] to run across this news article. What exactly will this mean for us with Sean acting for DOD also?” to which the Acting Assistant IG replied “Yeah…we don’t know yet, and neither does Sean. He says he’s hoping this will be a short-lived responsibility. Glenn Fine will still be at DOD, so hopefully he’ll still be able to basically run things. Remains to be seen!” 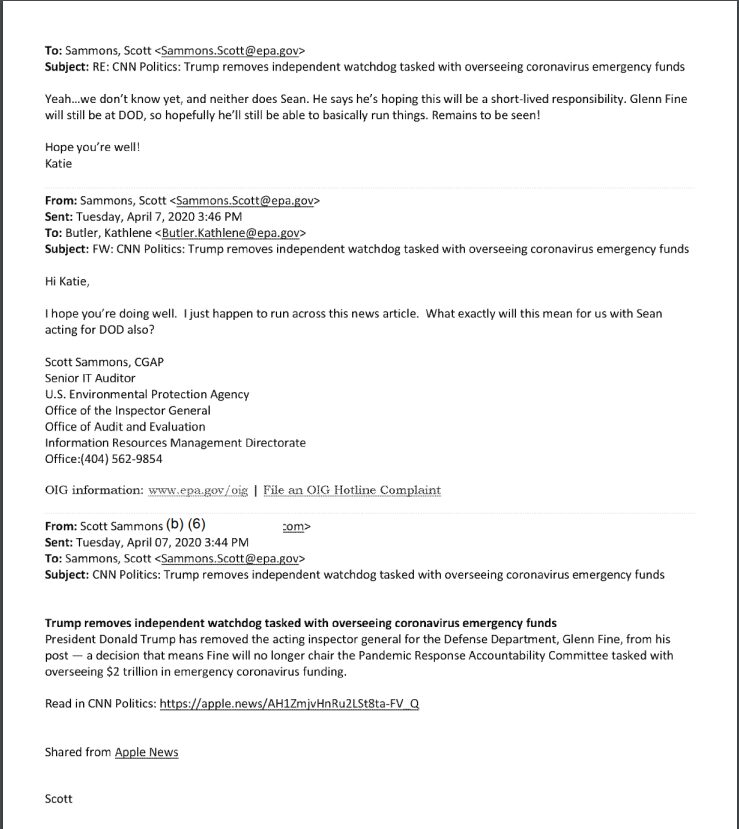 Similarly, the EPA OIG communications team and a senior lawyer had multiple conversations about whether the position was in effect. The Deputy Counsel to the IG emailed the Special Counsel to the IG, asking “Is this something we can confirm at this point? I would think prudence dictates we would refer to the WH press office to make the announcement.” The Special Counsel answered, “I believe it is public information already (and there was an announcement made yesterday).” When a reporter asked “how can he continue oversight of EPA when also trying to oversee OIG operations at one of the biggest, highest spending, geographically sprawling federal agencies at the same time?” the Special Counsel asked if the question could be directed to the White House, because “any response to that question is likely to be misinterpreted.” 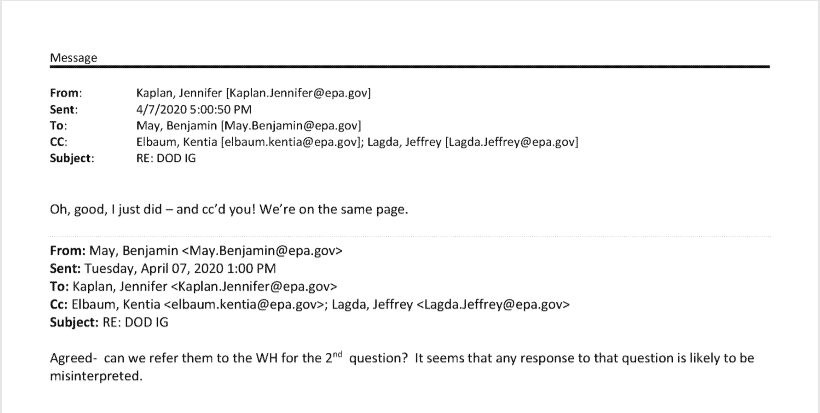 Senate staff also reached out to ask how O’Donnell got the position, writing, “I suspect you are as surprised as we are by these developments. My colleagues and I have questions.” According to emails, Senate staff wanted to know: “How did he get the position? Was it something that the IG asked to do? Who approached him? When?” The Special Counsel to the IG told EPA OIG staff that “We don’t have much to add; we have no underlying knowledge of the WH’s decision-making process here.”

Despite the confusion, EPA staff seemed to pick up on something the public would too: officials speculated that Fine was removed because he was in charge of overseeing coronavirus stimulus oversight. An Acting Director of Water Issues emailed the Acting Assistant IG for Audit and Evaluation, saying “What I don’t get is that Glenn Fines has been the ‘acting’ IG for DOD for over three years. What’s the big hurry to bring someone else in as acting while the nomination proceeds through the Senate?” The Acting Assistant IG replied “Maybe bc Glenn Fine is also chairing the CIGIE CARES oversight group?” She replied, “That would be a good reason.” 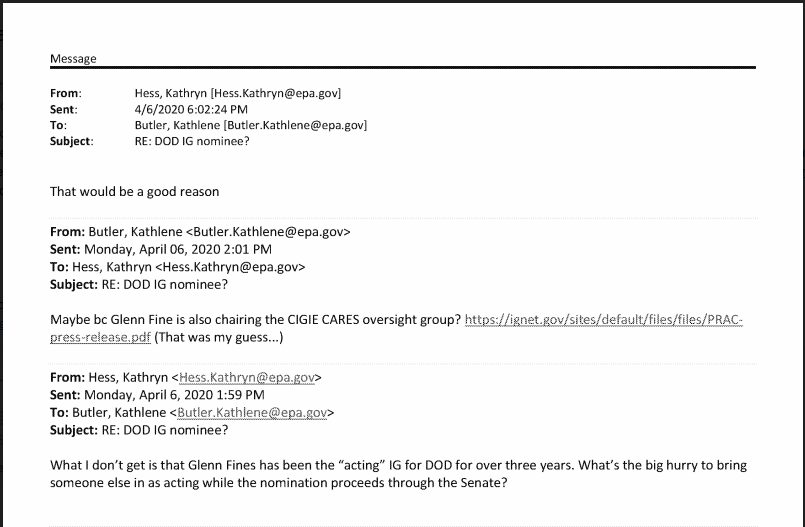 Meanwhile, O’Donnell’s security clearance to work at DOD was apparently still in process, even as he held the acting DOD position. On April 7, 2020, A program manager from DOD OIG emailed asking for a point of contact, saying “I’m in the process of working his security clearance transfer to DoD” the afternoon after O’Donnell took over at DOD. This raises questions of how much notice the White House had actually provided, and whether O’Donnell was actually able to assume his role immediately. The records do not indicate if or when O’Donnell received the necessary upgrade to his security clearance to oversee the Defense Department. 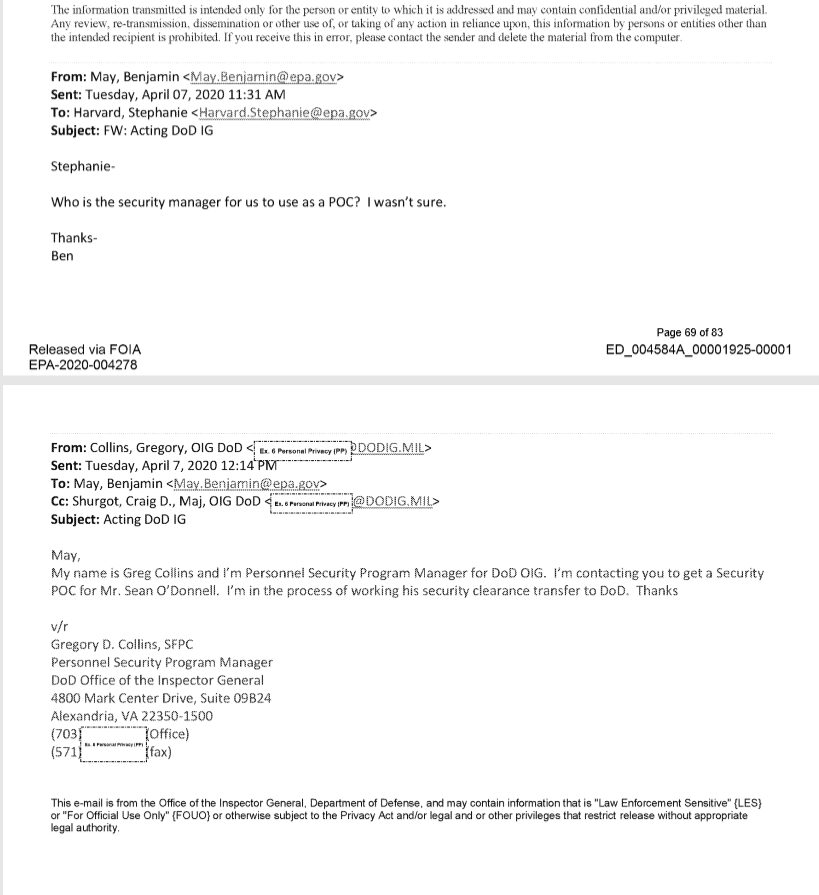 In one move, President Trump destabilized three watchdogs overseeing some of the most critical work in the federal government’s response to the pandemic. The American public is supposed to be able to trust that Offices of Inspectors General will be able to identify government waste, fraud, and abuse, notify the public or Congress when necessary, and tell the government how to fix the problem. This all important task can’t take place if Trump continues to attack and disempower these offices, leaving key officials in dual roles and catching staff flat-footed. The records from EPA OIG demonstrate a problem everyone should be concerned with: if our independent agency watchdogs  are preoccupied with responding to the president’s whims–who’s watching out for the American people? 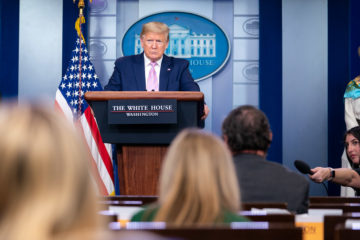 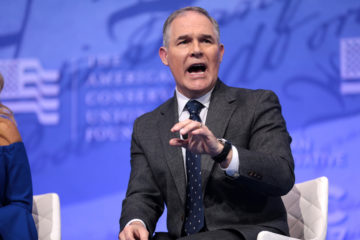 The gift list is illuminating, and illustrates how oil and gas companies sought to curry favor with Pruitt, a well-established ally of the fossil fuel industry. 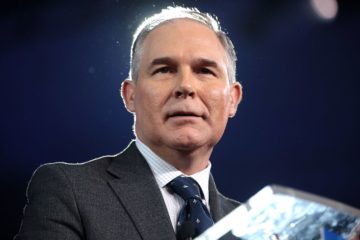