In less than a year, Counselor to the President Kellyanne Conway appears to have violated the Hatch Act on more than 50 occasions using her @KellyannePolls Twitter account which she uses for both personal and official government business.

On June 13, 2019, Special Counsel Henry Kerner, a Trump appointee, took the unprecedented step of recommending that Conway be removed from public service after finding that her numerous Hatch Act violations on Twitter and in television interviews had continued despite previous findings of violations. Special Counsel Kerner wrote that Conway’s misconduct “erode[s] the principal foundation of our democratic system–the rule of law.” The Hatch Act prohibits federal employees like Conway from “using their official authority or influence for the purpose of interfering with or affecting the result of an election.” Conway is one of thirteen Trump administration officials that OSC has found in violation of the Hatch Act, part of a pattern of the President and his appointees using the apparatus of the federal government to illegally bolster his personal political interests.

OSC’s June report regarding Conway found that between October 31, 2018 and June 13, 2019, she violated the Hatch Act at least 22 times using her Twitter account. Based on a review by CREW of Conway’s tweets since June 13, 2019, her apparent violations of the Hatch Act using Twitter have now reached more than 50 violations and counting. Conway’s recent offending tweets fall into five general categories:

Partisan Advocacy Against the Democratic Party

Given the Office of Special Counsel’s (OSC) findings and Conway’s ongoing conduct, her confirmed and apparently continuous violations of federal law also appear to violate Twitter’s Terms of Service and rules requiring users to use the platform in compliance with all applicable laws. As a result, based on Twitter’s rules and past practices, the company could sanction Conway including by suspending her use of their platform.

Prior to June 13, 2019, OSC, which has jurisdiction over enforcement of the Hatch Act, had never recommended that the President of the United States fire a White House employee for repeated violations of the law. OSC’s June report documented at least 22 times that Cownay broke the law using her Twitter account. OSC described Conway’s violations as “egregious, notorious, and ongoing,” noting that despite having clear knowledge of the Hatch Act, she “continues to disregard the law.” OSC concluded that while Conway often speaks on behalf of the President, the President’s exemption from the restrictions of the Hatch Act does not extend to her.

In the aftermath of OSC’s report, the White House Counsel defended Conway’s conduct, and President Trump said that he would not discipline her. President Trump has repeatedly abused the power of his office for his personal political advantage, and his vociferous defense of Conway following her violations of the Hatch Act is is just another example.

It should come as no surprise that following the President’s failure to hold Conway accountable for her misconduct, she has continued to run afoul of the law. In June, Conway flouted a duly authorized subpoena by House Oversight Committee Chairman Elijah Cummings to appear at a public hearing to examine her actions. In September, OSC confirmed to CREW that Conway was once again under investigation for potential Hatch Act violations arising from her Twitter use. According to CREW’s analysis of Conway’s @KellyannePolls account, she has used her Twitter account to commit more than 30 apparent Hatch Act violations since the release of OSC’s June 2019 report, bringing her total number of violations using the platform to more than 50.

Conway’s Use of Twitter to Break the Law Continues Unabated

OSC’s June 2019 report noted that Conway’s advocacy against Democratic presidential candidates and open endorsement of the President’s reelection effort on her Twitter account “constitute prohibited political activity under the Hatch Act.” There is no doubt that Conway continues to use her official authority to promote the success or failure of political candidates on Twitter. Although Conway has made some minor changes to her Twitter profile since June, her @KellyannePolls account still references her “Counselor” title, still includes images of her on the White House grounds, and Conway still uses the account for official business, including promoting her appearances on behalf of the Trump administration. As a result, her Twitter feed remains an account that she uses for official government business and thus is subject to the Hatch Act’s prohibition on political activity. Most importantly, her practice of using the account to make political statements has continued in the months since OSC’s rebuke.

In total, CREW has identified five distinct categories of Conway’s tweets since the release of OSC’s report that are apparent violations of the Hatch Act. The following list provides a sample of her offending tweets and retweets between June 13, 2019 and October 16, 2019. Each demonstrates Conway’s attempt to use her “official authority or influence for the purpose of interfering with or affecting the result of an election.”

Conway’s most frequent practice on Twitter in violation of the Hatch Act has been advocating against Democratic presidential candidates running to unseat President Trump in the 2020 election. OSC has found that these types of “partisan attacks on several Democratic party candidates” using her Twitter account violate the Hatch Act. Since June 13, 2019, Conway has used her account to attack or mock at least eight Democratic presidential candidates including: Joe Biden, Pete Buttigieg, Julián Castro, Kamala Harris, Beto O’Rourke, Bernie Sanders, Tom Steyer, and Elizabeth Warren. These apparent violations have taken the form of tweets and retweets. Recent examples from Conway’s Twitter feed include: 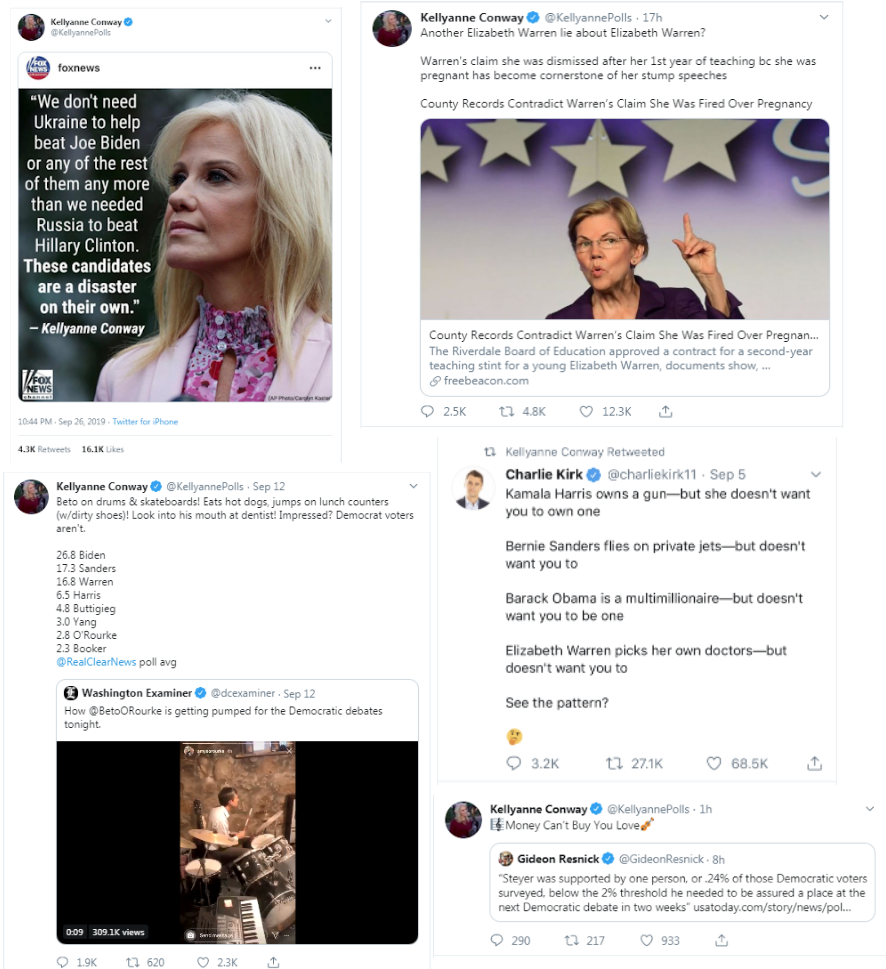 Conway has also repeatedly used her @KellyannePolls Twitter account to engage in prohibited political activity by promoting President Trump’s reelection. For example, Conway tweeted an image from a Trump campaign rally featuring the President’s slogan, “MAGA,” from the account she uses for official government business. Conway sent this tweet on June 13, 2019, the same day as the release of OSC’s damning report recommending her removal from federal service and despite crystal clear guidance from OSC on the topic. OSC has previously found that tweets promoting “MAGA” and otherwise endorsing Trump’s campaign seek to influence the 2020 presidential election in violation of the Hatch Act. Recent examples from Conway’s Twitter feed include: 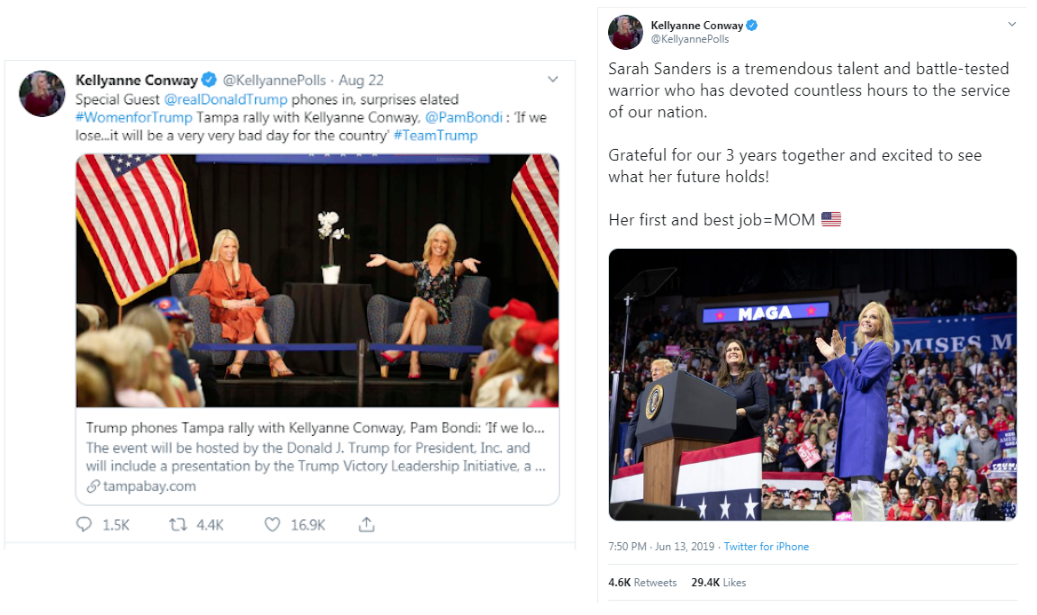 Partisan Advocacy Against the Democratic Party

Conway has posted partisan messages attacking the Democratic Party and Democratic candidates in the context of national elections from the Twitter account that she uses for official government business. OSC has previously found that such conduct constitutes prohibited political activity in violation of the Hatch Act. Recent examples from Conway’s Twitter feed include:

Conway has repeatedly used her @KellyannePolls Twitter account to share posts with fundraising and campaign ads boosting the Republican Party for the purpose of affecting the result of elections. These tweets include pictures of Conway appearing at Republican Party events. OSC has previously found that posting images and messages like these from the Twitter account that an executive branch employee uses for official government business violates the Hatch Act. Recent examples from Conway’s Twitter feed include:

On multiple occasions since the release of OSC’s June 2019 report, Conway has used her @KellyannePolls Twitter account to attack the political fortunes of the President’s perceived rivals. This criticism has been directed at Democratic members of the House of Representatives as well as former Republican Rep. Justin Amash. Because Conway also continues to use this account in her official capacity as a federal employee, her conduct violates the Hatch Act. Recent examples from Conway’s Twitter feed include:

Both Twitter’s Terms of Service and Rules prohibit users from using Twitter in a way that violates the law. OSC is a federal law enforcement agency, and it has found that Conway repeatedly violated the Hatch Act by using her Twitter account “for the purpose of interfering with or affecting the result of an election.” Furthermore, OSC has concluded that these abuses have been “egregious, notorious, and ongoing.” By violating the Hatch Act and demonstrating that she has no intention to stop, Conway’s conduct could warrant the suspension of her Twitter account.

While most Twitter suspensions and bans have been for using fake accounts or tweeting violent or harassing messages, Twitter’s rules are clear, and Conway is in violation of them. They do not allow users to “use our service for any unlawful service or in furtherance of illegal activities.” The Terms of Service are similarly straightforward and state that “[y]ou may use the Services only in compliance with these Terms and all applicable laws, rules and regulations.”

In 2018, Twitter issued public guidance noting that some exemptions from penalty for violating its Terms of Service apply to “elected world leaders.” Conway, however, was not elected, and is not a world leader. She works for one. OSC has already concluded that the exemption under the Hatch Act provided to the President does not extend to someone like Conway who sometimes speaks on behalf of one. Similarly, there is no reason why the Twitter exception for world leaders should extend to her.

In 2019, Twitter established a “public interest” policy related to the removal of tweets that violate its rules applicable to verified government/elected officials who, like Conway, have more than 100,000 followers. In this case, removal by Twitter is not an appropriate remedy given that Conway’s tweets are potentially government records. Removal of the offending tweets could pose additional legal problems for the White House if they are deemed presidential records and removed without being properly archived. Twitter has, however, both suspended and removed government officials from its site. For example, Twitter suspended both Australian politician Pauline Hanson after she suggested that the police should use cattle prods against peaceful protesters, and Paul Nehlen, who was then a GOP contender for Congress, for a racist tweet targeted at Meghan Markle.

While Conway’s offending tweets are not racist and certainly do not incite violence, they meet a far clearer standard — a federal law enforcement agency has found that they violate federal law. Furthermore, as OSC has explained, Conway’s illegal conduct arises from her use of Twitter “for the purpose of interfering with or affecting the result of an election.” OSC emphasized that not only did Conway break the law using Twitter, she continued to do so after repeated warnings. While the President has failed to hold Conway accountable for using her government post to promote his political campaign, Twitter certainly could take action in response to her flagrant violations of the platform’s rules to illegally influence our elections.