Citizens for Responsibility and Ethics in Washington (CREW) filed a complaint with the Department of Justice (DOJ) and the Department of Commerce’s Inspector General today requesting that the agencies investigate whether Secretary of Commerce Wilbur Ross violated federal conflict of interest laws by participating in multiple meetings with companies tied to his financial interests. The complaint also calls for an investigation into whether Secretary Ross submitted false information on his financial disclosure form by reporting that he had fully divested from one company and by omitting his interest in another.

The criminal conflict of interest statute, 18 U.S.C. § 208, prohibits an executive branch employee from participating personally and substantially in any particular government matter that will have a direct and predictable effect on his financial interest or any financial interest imputed to him, including those of his spouse. The purpose of the statute is to prevent an employee from allowing personal interests to affect her official actions, and to protect governmental processes from actual or apparent conflicts of interest.

Secretary Ross appears to have violated the statue. Forbes recently reported that between March and May 2017, Secretary Ross participated in a series of meetings with the CEOs of Boeing, Chevron Corporation, Greenbrier Companies, and the International Automotive Components (IAC) Group at a time when they were lobbying his agency and other parts of the government on trade issues and policy matters impacting the companies. At the time of these meetings, Secretary Ross or his wife held financial interests in each of these companies despite his previous pledge to divest from approximately eighty potentially problematic holdings. Specifically, Ross pledged to divest from Boeing and Chevron within 90 days of his confirmation and entities related to IAC Group within 180 days of confirmation. Ross did not include Greenbrier in his pledge to divest because those holdings were not reported during his confirmation process.

Furthermore, Secretary Ross’s activities appear to be part of a systemic pattern of improper conduct. Secretary Ross has already been the subject of numerous prior complaints of ethical misconduct, including allegations that he made false statements to OGE when by  representing that he divested certain stock holdings before actually doing so, violated the STOCK Act and other insider trading laws by engaging in short sale transactions, and engaged in numerous ethical improprieties arising from his financial disclosures, divestment, and recusal obligations.

Secretary Ross’s alleged conduct a knowing and repeated disregard for his ethics obligations, including the obligation to recuse from matters until he divested his problematic assets and to accurately identify his financial interests so as avoid making a false statement. The systemic nature and seriousness of his alleged actions warrant an immediate, thorough, and wide-ranging investigation of the evidence to determine whether Secretary Ross knowingly and willfully violated the law. 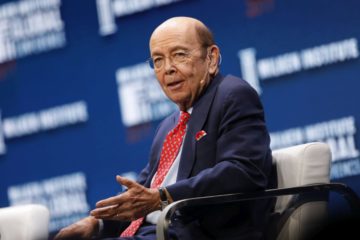 Today, Citizens for Responsibility and Ethics in Washington (CREW) filed Freedom of Information Act (FOIA) requests with the State Department, the Department of Commerce, the United...