Mark Esper, Former Raytheon Weapons Lobbyist, is in Charge of the Pentagon

Following the targeted killing of Iranian General Qassem Soleimani by American military forces on January 3rd, weapons manufacturer Raytheon’s stock shot up, closing at a record high. The man in charge of the Pentagon, Defense Secretary Mark Esper, spent years as Raytheon’s top lobbyist before joining the Trump administration. Esper’s former employment casts a shadow over every decision he makes as Secretary of Defense, and the people investing in his former company are betting on business being good under Esper. 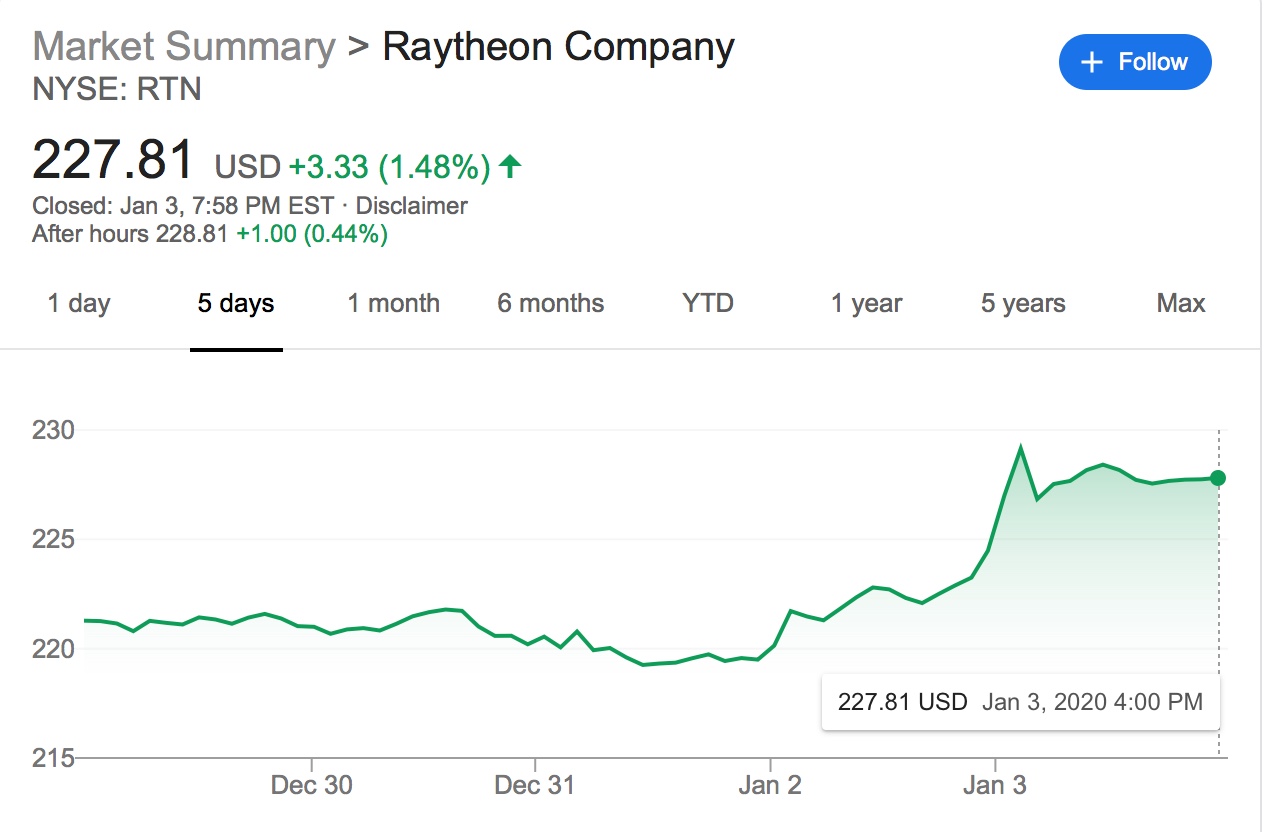 When Esper was preparing to leave Raytheon to join the government, he reported that he was paid $1,524,018 in salary and bonuses. His job, as he described it, was to be “Responsible for company interactions with members of Congress and their staff at the Federal level and with all state and local elected officials and their staff.” Now that he’s Defense Secretary, he does a lot more than interact with members of Congress and their staff—he is the principle defense policymaker and adviser, and in charge of signing off on massive government contracts.

This is not to say that Esper is necessarily pushing military options which would benefit his former employer. This is also not to say that Esper is alone in the administration as a former lobbyist, in fact, a ProPublica analysis found that the Trump administration has hired 281 lobbyists, often regulating the industries they work for. However, when the former lobbyist in question is now the Secretary of Defense, the risks are magnified. Every action he takes must be scrutinized through the lens of Raytheon’s benefit. In his confirmation hearing, Esper flat out said that he would not recuse himself from matters involving Raytheon for the “duration of his government service.”

In his farewell address, President Dwight D. Eisenhower, a former five star general and Supreme Commander of the Allied Forces in Europe during World War II, warned, “In the councils of government, we must guard against the acquisition of unwarranted influence, whether sought or unsought, by the military-industrial complex. The potential for the disastrous rise of misplaced power exists and will persist.” A weapons lobbyist turned defense secretary is exactly what Eisenhower warned the nation about.

The decision to target Soleimani came in part through an effort by Esper, working along with Secretary of State Mike Pompeo. This decision, with the national security implications it brings, was reportedly not on the table under former Secretary of Defense James Mattis, a former four star general and Commander of the United States Central Command, responsible for America’s armed forces in the Middle East. But things are different with a former weapons lobbyist at the helm.

He also refused to commit to not returning to Raytheon immediately after leaving his position in government. If Esper rejoins Raytheon after he leaves the government, he would not be the only former Trump administration official to take advantage of the lucrative revolving door that opens to those who have occupied powerful positions in government. Just one month after Rick Perry left his position as Energy Secretary, he rejoined the board of the company that controls Energy Transfer LP, a pipeline company that he worked with until 2016. The only difference is that now, Perry has years of promoting oil and gas deregulation and a rolodex of powerful and potentially useful contacts at the Energy Department.

Similarly, John Kelly joined the board of Caliburn, cashing in on the “Zero Tolerance” policy he pushed while Department of Homeland Security Secretary. Even Esper’s predecessor, Jim Mattis, rejoined the board of General Dynamics, another government contractor, just months after resigned as Defense Secretary. Given that Esper would not rule out rejoining Raytheon, it would come as no surprise if he took a similar route.

It’s become commonplace in the Trump administration for lobbyists to oversee the agencies they once lobbied. This has led to rollbacks of environmental protections and accusations of the fox guarding the henhouse. But when it comes to a weapons lobbyist in charge of our nation’s Department of Defense, the danger feels more immediate. Esper will have a major effect on any potential military action the Trump administration takes. President Eisenhower warned the nation of the dangers of increased power and influence by the military-industrial complex; we should all heed his warning.