Last Wednesday, American Conservative Union Chairman Matt Schlapp made sure that his more than 90,000 Twitter followers knew he had insider access to the Trump White House. “Just met with the President,” Schlapp tweeted, adding that it was “clear” President Donald Trump was “willing to deal” on the government shutdown, but would not “back down on border security.” 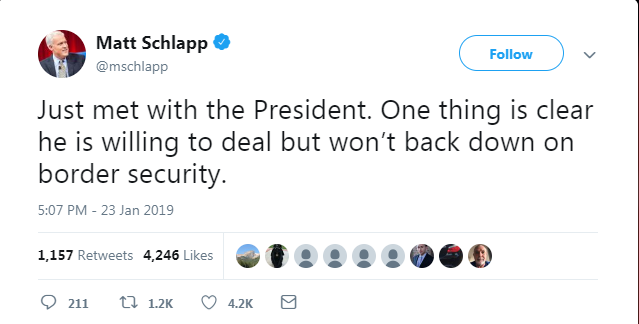 Schlapp was at the White House for a meeting on immigration between Trump and conservative leaders, but he could have just as easily been there in his capacity as a lobbyist for major companies like Samsung Electronics America and Abbott Labs.

According to lobbying disclosure reports covering the final quarter of 2018 that were recently filed by Schlapp’s lobbying firm, Cove Strategies, he is listed on five accounts that involved contacting the Executive Office of the President (EOP). For one of the clients, Ligado Networks, Schlapp is the only listed lobbyist and EOP is the only government agency listed as a point of contact.

Though Schlapp has been registered to lobby under the Cove Strategies banner since 2009, it was only recently that he was listed on Cove lobbying reports involving White House contacts. In fact, Schlapp,  who had lobbied the Bush White House for Koch Industries, was never listed on any Cove lobbying reports listing EOP contacts until the fourth quarter of 2017, which happens to be the first full quarter in which his wife, Mercedes Schlapp, was working in the Trump White House.

In 2018, the number of clients for whom lobbying reports suggest Schlapp made lobbying contacts at EOP steadily increased, going from one in the first quarter to five in the fourth. 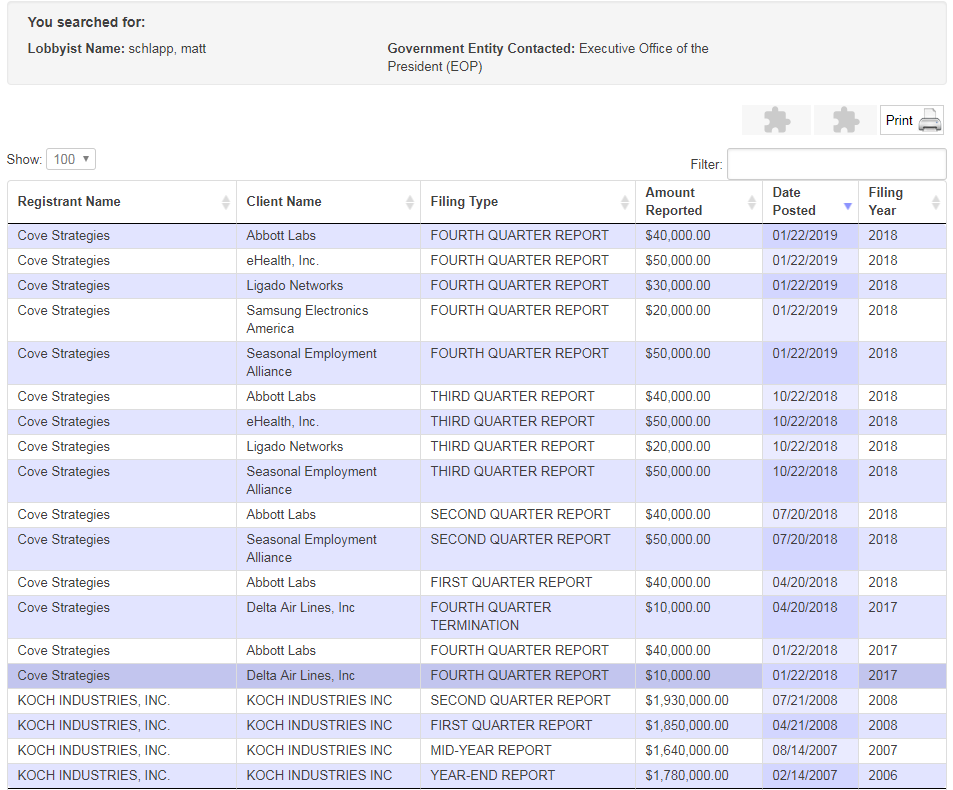 Cove Strategies describes the work it does as “leveraging established relationships in conservative, center-right, Republican, and free market circles on behalf of our clients,” so it’s no surprise that the company never reported contacting EOP during the Obama years. When Trump took office, Cove did start contacting EOP, but those initial contacts were handled by another Cove partner, Stephen Replogle.

Then, Mercedes Schlapp joined the Trump White House in mid-September 2017 to handle strategic communications. In the fourth quarter of 2017, which began on October 1, Matt Schlapp was listed on lobbying reports involving EOP contact on behalf of Delta Air Lines and Abbott Labs.

According to her initial executive branch financial disclosure, Mercedes Schlapp, who co-founded Cove Strategies with her husband, left the company in September 2017. She also would have been required to sign the Trump administration’s ethics pledge, which bars appointees from working on any particular matters involving their former employers or clients for two years.

But the loss of a co-founder has not had a negative effect on the firm’s business. Since she entered the White House, Cove has signed up six new clients. The company had only signed up two new Trump-era clients before Mercedes left to join the administration.

Federal lobbying disclosure reports do not require lobbyists like Matt Schlapp to detail their lobbying contacts other than naming the issues and federal agencies involved, so it is impossible for the public to glean who in EOP Schlapp has contacted on behalf of his clients or how often he contacted them within a given quarter. White House visitor logs would reveal the names of any staffer who sponsored Schlapp’s entrance to the White House complex, including his wife, but the Trump administration decided in early 2017 to reverse the Obama White House policy related to the disclosure of visitor logs.

As Cove Strategies’ lobbying income has significantly increased since Trump took office, the Schlapps have faced criticism for the seeming overlap between Mercedes’ White House position and the good fortunes of Matt’s lobbying firm. One anonymous White House official told New York’s Olivia Nuzzi , “Cove Strategies should change its address to 1600 Pennsylvania Avenue. The president doesn’t know it, but they’ve set up their headquarters in the West Wing of his house, rent free.”

Cove Strategies denies that anything untoward is going on. Angela Flood, another principal at Cove, told New York’s Nuzzi that Matt Schlapp’s White House visits were standard and unrelated to his client work. “I can tell you that we have gone to great lengths to draw very bright lines between anything that happens at Cove and [Mercedes],” Flood said.

However, the fact that more than a dozen lobbying reports suggest Matt Schlapp is contacting EOP on behalf of Cove clients undermines claims that none of his White House visits are related to his work for his lobbying firm.