Last November, eight members of the House and Senate met privately with a representative of a group that advocates for the “overthrow of the Islamic Republic in Iran.” Six of these members of Congress had received maximum contributions from the regime-change activist during the previous election; two of them, Senators Ted Cruz and Marsha Blackburn, sit on the powerful Senate Foreign Relations and Armed Services Committees, respectively.

The access granted to this donor, who has given a total of nearly $280,000 to Republican Party campaigns and committees since 2018, despite never having given contributions in the past, shows the degree to which members of Congress can allow deep-pocketed donors to weigh in on even the most delicate issues, such as Iran policy. It also sheds light on who has the ear of American officials regarding Iran as relations between the two countries reach their tensest point in years.

The donor who met with the eight members of Congress, retired Goldman Sachs partner Ali Saadat-Meli, is a founding member of a group called Iran Revival, which was founded in September 2018 by anti-regime activists among the international Iranian diaspora. (Iran Revival is also known by its Persian-language name, “Farashgard.”) The group advocates for regime change in Iran and is aligned with exiled Iranian crown prince Reza Pahlavi, who seeks a role in Iran’s next government.  Meli has been deeply involved in Iran Revival’s leadership and outreach efforts, sometimes appearing in Persian-language media as a representative of the organization.

Before 2018, Meli had never made a political contribution in the United States. That changed during that year’s election, however. Between June and November 2018, Meli doled out a steady stream of contributions to Republican campaigns and political committees, giving $2,700, the maximum amount permitted by law, to 58 different Republican congressional campaigns.

In November of last year, Iran Revival posted a video touting a set of meetings that month between Meli and eight members of Congress: Senators Ted Cruz, Marsha Blackburn, Josh Hawley, and Mike Braun, and Representatives Scott Perry, Ted Budd, Denver Riggleman, and Chip Roy. The goal of the meetings, according to the video, was to discuss U.S. policies regarding Iran, as well as “the strengthening of Iranian-American political ties with Republican and conservative politicians.” 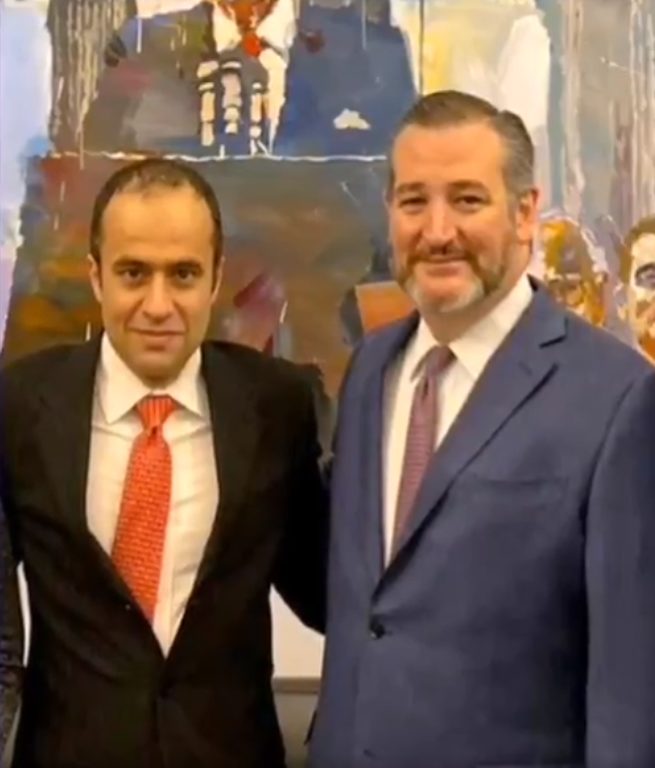 Meli’s access to these elected officials appears to correlate with his political contributions. Of the senators who met with Meli, all but one, Senator Hawley, had received a maximum contribution from him in 2018. Similarly, of the representatives who met with Meli, all but Rep. Roy had received maximum contributions from him. Finally, the video documenting Meli’s meeting with the members of Congress was posted on November 15; on November 13 and 16, Meli gave a total of $21,200  to the House Freedom Fund and Senate Conservatives Fund, two political committees that have spent in support of the eight members of Congress who met with him.

This meeting was not the first time that Meli has had access to senior government officials: On September 28, 2018, Meli and another co-founder of Iran Revival participated in a roundtable discussion on human rights in Iran featuring Brian Hook, the State Department’s top Iran official and a senior advisor to Secretary of State Mike Pompeo. Both Iran Revival members were interviewed for a promotional video produced and distributed by the State Department afterwards.

Last month, all four representatives who met with Meli voted against House Democrats’ resolution restricting President Trump from using military force against Iran without congressional approval. All four senators who met with Meli have supported the Trump administration’s aggressive approach towards Iran.

Regardless of whether Meli’s meeting with members of Congress actually influenced those members’ views or positions on Iran policy, the access he was granted by elected officials, which began only after he started to make political contributions, appears to exemplify the often transactional nature of American campaign finance. And if the eight members of Congress who met with Meli did so because of his contributions, it raises an urgent question: As relations between U.S. and Iran grow ever more precarious, are our elected officials making foreign policy decisions based on the best interests of their constituents—or are they more focused on trying to raise money for their campaigns?