Secretary of State Mike Pompeo reportedly told Mitch McConnell he would not run for Senate in Kansas, but a pile of evidence tells a different story of Pompeo’s deliberate and repeated outreach to the state. The filing deadline for the race is not until June 2020, leaving Pompeo plenty of time to make a final decision and use his platform as Secretary of State to stage a run, despite serious legal problems with the use of taxpayer resources for political gain.

As early as January 2019, speculation surrounded Pompeo’s potential preparation for a candidacy for Senate; he was even slated to meet with Ward Baker, a major Republican strategist. A month later, Pompeo said that a Senate run was “ruled out.” In a July interview with KCMO Radio in Kansas City, he re-opened the possibility for a Senate run. In November, he reportedly told Republicans about his plans to resign from the Trump administration in order to run. In December, he created a personal Twitter account with the bio “Currently serving as the 70th Secretary of State.” By January, he was out again. Apparently President Trump was still not convinced as recently as last week, and asked in public remarks whether Pompeo was planning to run.

Pompeo’s repeated flip-flopping has made it hard to keep up. But maybe that’s the point. Under federal law, if Pompeo were to declare his candidacy for the Senate, he’d have to resign his post as Secretary of State. If we have been made to believe he’s definitely not running this time, perhaps watchdogs will back off. We can’t know whether Pompeo will run or not, but State Department records indicate that, at best, taxpayers are funding Pompeo’s affinity for his home state and at worst, they are funding a potential run for elected office.

Before 2019, Pompeo made one official visit to Kansas as a member of the Trump administration. In 2019 he made three, plus a fourth personal trip. Kansas news interpreted the escalation as a possible “shadow” campaign setting the stage for a run.

The snapshot of Pompeo’s calendar for his first trip to Kansas in 2019 certainly looks more like a schedule for a Senate candidate for than the government’s top foreign policy official. More than 200 pages of records obtained by CREW through a Freedom of Information Act request provide a window into Pompeo’s divided focus between his duties as Secretary of State, and his deep interest in Kansas.

While Pompeo was in Kansas for the “Road to Global Entrepreneurship Summit Heartland” in March, he had personal interviews with nine different local Kansas outlets, one “nationwide” reporter and no international reporters. State Department employees were asked to compile lists of Kansas media recommendations, including statewide and student newspapers. They were not asked to reach out to foreign press. If the summit was really about promoting global entrepreneurship in the heartland, why would the focus of his outreach only extend within Kansas state lines?

State Department records also show that an invitation for a The Wall Street Journal reporter to join a phone briefing was rescinded at the request of “someone in Kansas.” It is unclear why someone based in Kansas would hold any power over the list of reporters allowed on a call with the Secretary of State.

Pompeo’s interview transcripts, keynote address and schedule for the summit also more closely resemble those of a candidate than a cabinet member, with frequent references to how much he misses the state, Kansas sports, and his history of job creation. All available as official State Department documents on the agency’s website.

On the same day as Pompeo’s keynote and his flurry of interviews with Kansas media, he reunited with a former campaign official of his, Alan Cobb. Cobb introduced Pompeo’s keynote, and participated in a discussion with him. Cobb has held many powerful positions within the conservative political universe, from lobbying for the Koch brothers-funded Americans for Prosperity (AFP), to work with the Trump campaign, to President of the Kansas Chamber of Commerce. Cobb also happens to be Pompeo’s former congressional campaign advisor and personally donated $1,000 to Pompeo’s campaign in 2016. Furthermore, AFP spent $400,000 supporting Pompeo’s campaign at the time Cobb advised the campaign. Cobb told the Associated Press in November that “there’s a chance he runs,” and defended Pompeo’s role in the Ukraine scandal, calling it a “nothing burger.”

The questions aboutwith Pompeo’s March trip were echoed by his trip in October, where he met with Charles Koch to discuss the Senate race on an official trip. Pompeo was the single top recipient of contributions from Koch Industries nationwide during his time in Congress, which makes the visit all the more strategic if he were planning to launch a campaign. If Pompeo was planning to run for Senate, meeting with former staffers like Cobb and massive donors like Koch would likely be among his first moves.

Pompeo’s 2019 trips show a Secretary of State preoccupied by local media and political outreach during government travel. Strategizing a Senate run should never be the foremost concern for a Secretary of State, whose portfolio involves foreign policy and international relations, not Kansas relationship maintenance. Pompeo has stuck taxpayers with the bill for his flip-flopping, and even if he doesn’t ultimately run, that’s still a legal problem. 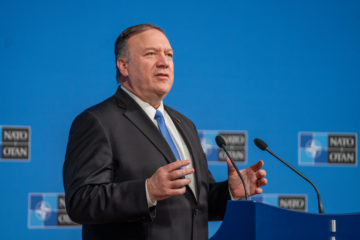 Pompeo's exclusive call touched upon the topic of “Islamic radicalism,” yet it did not include any Islam-focused outlets. 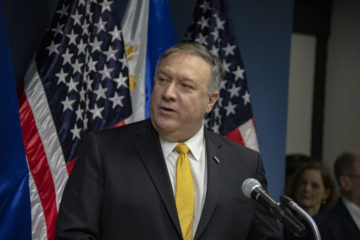