Washington—Ambassador to the United Nations Nikki Haley appears to have violated the Hatch Act by using her official Twitter account for political activity, according to a complaint filed by Citizens for Responsibility and Ethics in Washington (CREW) with the Office of Special Counsel (OSC).

Haley likely violated the Hatch Act by retweeting the first of a chain of tweets that President Trump posted in support of the election of Ralph Norman, at the time a candidate running in a special Congressional election, that read “Ralph Norman, who is running for Congress in SC’s 5th District, will be a fantastic help to me in cutting taxes, and…”  In a second tweet that was part of the same thread, President Trump continued, “…getting great border security and healthcare. #VoteRalphNorman tomorrow!”

The retweet was from an account that identified Haley as the “United States Ambassador to the United Nations” and featured a cropped version of her official photo from the State Department’s website and a header photo of Haley standing with President Trump and 14 UN ambassadors in the White House.

“As the recent former Governor of South Carolina, Ambassador Haley may care deeply about her party’s electoral performance in the state, but the rules separating politics from official government work still apply,” CREW Executive Director Noah Bookbinder said. “The Hatch Act is intended to prevent federal employees from using their official position for electoral purposes, which is exactly what Ambassador Haley appeared to be doing.”

The Hatch Act prohibits any executive branch employee from “us[ing] his official authority or influence for the purpose of interfering with or affecting the result of an election.” OSC guidance on applying the Hatch Act prohibitions to social media, including Twitter, specifically advises that an employee may not “use a Facebook or Twitter account in his official capacity to engage in political activity” and requires that “any social media account created in a federal employee’s official capacity should be limited to official business and remain politically neutral.”

“This is not the first time a Trump administration employee has appeared to violate the Hatch Act,” said Bookbinder. “The OSC needs to conduct a thorough investigation, as it has before, to show that these violations will continue to be taken seriously and the White House must take action to make sure these violations stop.”

Following a CREW complaint earlier this year, OSC reprimanded White House Director of Social Media Dan Scavino, Jr. for violating the Hatch Act by using his official Twitter account to call for the defeat of a member of Congress in a primary election. 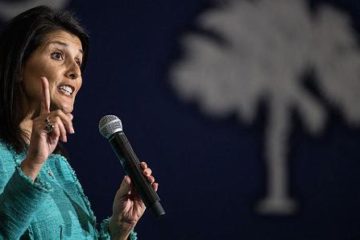 Haley’s 2017 financial disclosure report listed acceptance of gifts of 7 free flights on private aircraft from 3 South Carolina businessmen for herself and her husband.