Washington— Acting Defense Secretary Patrick Shanahan appears to have violated ethics rules by promoting Boeing in the scope of his official duties at the Department of Defense (DOD) and disparaging the company’s competitors to his subordinates, according to a complaint filed today by Citizens for Responsibility and Ethics in Washington with the DOD’s Office of Inspector General. Before joining DOD, Shanahan worked at Boeing for more than 30 years where he directly oversaw military contract programs including Boeing Missile Defense Systems and Boeing Rotorcraft Systems, as well as commercial production including the 737 MAX and 787 Dreamliner.

According to news reports, Shanahan promoted Boeing in discussions at the Pentagon about government contracts, saying that Boeing would have performed better than its competitor Lockheed Martin had it been awarded a DOD fighter jet contract. It was also reported that Shanahan prodded DOD to increase funding for Boeing-produced fighter jets in next year’s budget despite the Air Force’s preference for an aircraft produced by Lockheed Martin.

Shanahan is the first person to lead the DOD in about 70 years with virtually no government or policy experience. Since Shanahan’s arrival at DOD, Boeing has been particularly successful in winning government contracts, including multiple multibillion-dollar contracts for major aircraft programs. In early 2019, Boeing shares increased in value by 6.2 percent after the company beat quarterly earnings expectations and posted annual revenue of more than $100 billion for the first time ever.

“We don’t know whether Shanahan had direct involvement in decisions affecting Boeing, but even the appearance of bias raises serious concerns and potential ethics violations,” Bookbinder said. “It is imperative that the Office of Inspector General fully investigate Shanahan’s conduct.” 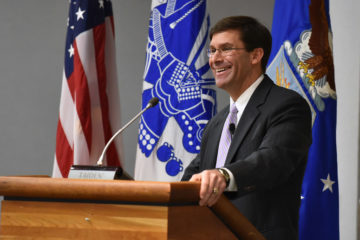 Mark Esper joined the government following years as a top lobbyist for Raytheon, which just this week was awarded millions in government contracts.