Washington — Ambassador to the United Nations Nikki Haley should be investigated to determine if she complied with ethics regulations when she accepted seven free flights for herself and her husband on luxury private aircraft from three South Carolina businessmen, according to a request filed by Citizens for Responsibility and Ethics in Washington (CREW) with the State Department’s Inspector General.

Ambassador Haley’s 2017 public financial disclosure report listed her acceptance of gifts of seven free flights on private aircraft from three South Carolina businessmen for herself and her husband. Those flights were between New York, Washington, DC, and three cities in her home state of South Carolina, and appear to have been worth tens of thousands of dollars to her. In her financial disclosure report, Ambassador Haley asserted that each gifted flight qualified for an exception based on a personal relationship with the giver. The report, however, does not provide enough information to demonstrate that this exception was applicable to the flights. Whether the exception applies depends partly on whether the three businessmen were the only sources of the gifts; if business entities were sources of the gifts, the exception was inapplicable.

Federal ethics regulations prohibit employees from soliciting or accepting gifts given because of the employee’s official position. They also direct employees to consider declining otherwise permissible gifts if they believe a reasonable person would question their integrity or impartiality as a result of accepting the gifts. At a minimum, Ambassador Haley should have been conscious of the appearance concerns surrounding her acceptance of gifts of private luxury air travel at a time when her colleagues in the administration were making news with their own lavish air travel.

“By accepting gifts of luxury private flights, Ambassador Haley seems to be falling in line with other Trump administration officials who are reaping personal benefits from their public positions,” said CREW Executive Director Noah Bookbinder. “Our ethics laws are clearly written to prevent even the appearance of corruption and improper influence. We’re calling on the State Department’s inspector general to further investigate the nature of these gifts, determine whether they are in line with ethics rules, and ensure that employees like Ambassador Haley are fully trained on the application and importance of ethical standards.” 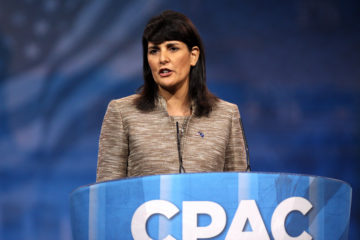