Washington — In the time leading up to the midterm elections, Trump officials across the administration appear to have violated the Hatch Act by using their official government positions and resources for political activity, according to seven complaints filed today by Citizens for Responsibility and Ethics in Washington (CREW) with the Office of Special Counsel (OSC). The officials include White House Press Secretary Sarah Huckabee Sanders, employees in the Office of the First Lady, Assistant to the President for Economic Policy and Director of the National Economic Council (NEC) Larry Kudlow, and employees at the Department of Homeland Security.

The violations detailed in CREW’s complaints range from using official government Twitter accounts to post tweets directed at the success or failure of a political party, to expressing political views during media interviews while in an official government capacity, to issuing official press releases advocating for the success of a particular party or invoking a version of Trump’s campaign slogan “Make America Great Again.” The officials named in the complaints are: White House Press Secretary Sarah Huckabee Sanders, Assistant to the President for Economic Policy and Director of the NEC Larry Kudlow, Special Assistant to the President and Executive Assistant to the President Madeleine Westerhout, Assistant to the President and Senior Advisor for Strategic Communications Mercedes Schlapp, and Deputy Director of the White House Office of Management and Budget Russ Vought. Complaints were also filed against employees in the Office of the First Lady and employees at the Department of Homeland Security.

“During the midterm campaign season, we witnessed Trump Administration officials at all levels engaged in unprecedented partisan political activity in direct violation of the law,” said CREW Executive Director Noah Bookbinder. “Time and time again, Trump administration officials have blatantly abandoned their legal obligations under the Hatch Act not to abuse their official positions for partisan politics, and they virtually dared anyone to hold them accountable. This simply cannot become the new normal, and CREW will continue to call out the rampant abuses coming from this administration.”

Following previous CREW complaints, multiple Trump Administration officials have been cited for Hatch Act violations, including outgoing Ambassador to the United Nations Nikki Haley, Deputy Assistant to the President and Communications Director for the Office of the First Lady Stephanie Grisham and White House Director of Social Media Dan Scavino. 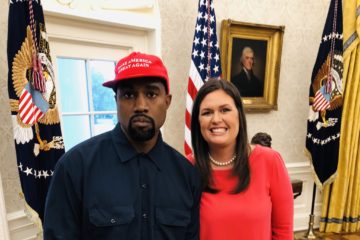 Sarah Huckabee Sanders likely violated the Hatch Act by using her official Twitter account to tweet a photo with Kanye West, who was wearing a “Make America Great Again” hat.