Washington, DC—As Rep. Justin Amash and White House Director of Social Media Dan Scavino point fingers at each other on Twitter over the failure of “Trumpcare,” both should be investigated for violating rules against using social media for politics according to complaints filed today by Citizens for Responsibility and Ethics in Washington (CREW) with the Office of Congressional Ethics (OCE) and Office of Special Counsel (OSC).

According to the OSC complaint, Scavino likely engaged in political activity prohibited by the law by tweeting the Amash “is a big liability” and that President Trump’s supporters should “defeat him in [the next] primary”from an account that showed him standing in the Oval Office next to the official presidential flag, and had a header photograph showed Trump giving a speech behind a lectern showing the official presidential seal. After being called out by ethics experts, Scavino removed the photograph with the official seal and changed his Twitter bio to refer to the campaign.

As part of his response, Amash tweeted from the same account he uses for Congressional purposes, “Bring it on. I’ll always stand up for liberty, the Constitution & Americans of every background. You can help here:” with a link to donate to his campaign. The use of his Twitter account to direct followers to his campaign fundraising site appears to violate House rules by using an official resource for campaign fundraising.

“The rules are clear that government officials aren’t allowed to use their position for campaign activity,” CREW Executive Director Noah Bookbinder said. “In the case of Scavino and Amash, it appears that they both are in the wrong.”

The Hatch Act prohibits any executive branch employee, such as Scavino, from “us[ing] his official authority or influence for the purpose of interfering with or affecting the result of an election.” While the White House claims that it was not a Hatch Act violation because the tweets came from a personal Twitter account, according to the OSC, the prohibition applies to political activity on a personal account such as Scavino’s when the employee refers to his official title or position. Scavino did so by using the photographs, particularly the one showing him in the Oval Office next to presidential flag which appears next to the tweet every time it is viewed. Likewise, the House of Representatives rules prohibit members from using social media for political activity to ensure that congressional resources are not used for campaign activities.

“While much attention has been paid to the intra-party squabbling between Scavino and Amash, the bigger issue may be the lack of respect for rules governing political activity,”Bookbinder said. “The separation of official and campaign business is a necessary factor in keeping politics out of official government activity, and needs to be respected at every level.” 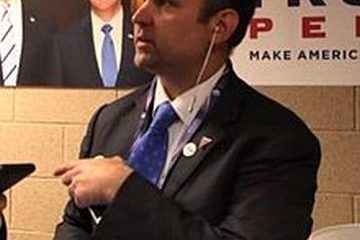 “OSC has made clear with this ruling that they are going to enforce these important rules and work to keep the government free from inappropriate politics.”