The Smear Campaign Against Mueller

When Robert Mueller was appointed Special Counsel in May 2017 to lead the inquiry into Trump campaign ties to Russia, leading Republican voices sang his praises, calling him a man of “uncompromising integrity,” with a “stellar” reputation and the “right credentials for this job,” who will conduct a “thorough and fair” investigation with “trust and confidence of the American people.” As Senate Majority Whip John Cornyn stated, “Robert Mueller is perhaps the single-most qualified individual to lead such an investigation…and he’s certainly independent.”

Just a few months later, that attitude has changed. After the Special Counsel’s office (SCO) had secured guilty pleas from individuals including former national security advisor Michael Flynn, and indictments from individuals including top Trump campaign official Paul Manafort, the White House and its allies escalated efforts to publicly discredit the Special Counsel. Now that he is turning his attention to interviewing the President, those efforts are reaching a crescendo. According to these critics, the SCO’s work, and related efforts at the Department of Justice and the Federal Bureau of Investigation, are politicized, unfair, and rife with misconduct – the antithesis of the professionalism for which Mueller has been recognized throughout his career. If these critics are correct, a veteran prosecutor long known for following the rules is now acting as a rogue partisan hack. He is not.

This report examines the facts and law relating to seven major allegations regarding SCO conduct: (1) Mueller has conflicts of interest that disqualify him from the investigation; (2) Mueller’s team has conflicts of interest that disqualify them; (3) Department of Justice (DOJ) actions regarding two career government officials, Peter Strzok and Bruce Ohr, are grounds for disqualifying Mueller; (4) the Special Counsel’s office gained unauthorized access to privileged Trump transition office data; (5) the Special Counsel’s inquiry is predicated on unreliable Clinton campaign opposition research; (6) the inquiry, and particularly the SCO’s supervisor, Deputy Attorney General Rod Rosenstein, are compromised by intelligence-gathering abuses to be revealed in the so-called “Nunes memo”; and (7) a fair inquiry requires appointment of an additional Special Counsel to review FBI and DOJ conduct.

Individually, these allegations are unfounded, as we detail below. Collectively, they amount to one of the most sustained smear campaigns against honest government officials since Senator Joe McCarthy’s attacks of the 1950’s. We address them collectively in this report because a pattern has emerged of the President and/or his enablers making wild allegations, dominating a media cycle, then pivoting away as the falsity of the claims emerge. Rather than defending the spurious attacks, after a short interval, a new and baseless charge is launched, and the vicious cycle is repeated. We think the pattern is highly relevant to the credibility of each new charge relating to the SCO—the latest coming in the form of the Nunes memo—and that it is important for a rebuttal of them all to be on the record.

That said, this analysis can only offer an assessment based on the public record facts that are currently available. It does not purport to draw definitive final conclusions, as additional facts are likely to emerge as the inquiry unfolds, and DOJ rules limiting comment by prosecutors during ongoing inquiries prevent the SCO from providing relevant facts to the public record for the time being. Based on what is publicly known, however, this analysis concludes that the Special Counsel to date has conducted an inquiry that fully complies with relevant laws, rules, and guidelines – and that is wholly consistent with Mueller’s reputation for playing by the book.

Following is an executive summary of the report’s findings on each of the seven allegations, and a more detailed analysis of the facts and law follows in the body of the report. 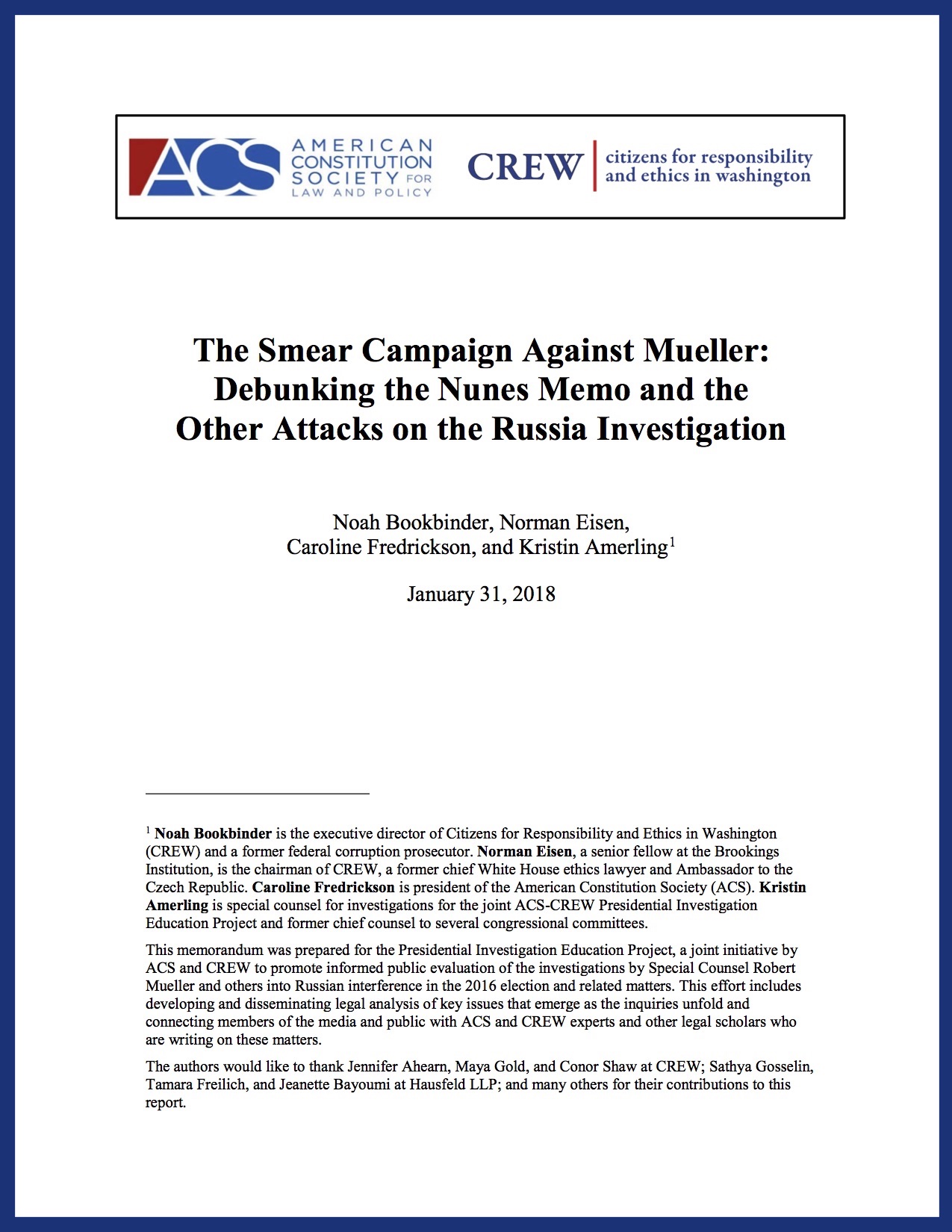