Last month, the Trump Organization received approval for a new trademark in Argentina, the company’s first foreign trademark in six months. The trademark grants the Trump Org the use of the name “Trump” under a classification that includes club services, conferences, golf facilities, and recreation facilities — services that are present in Trump’s several luxury hotels. And it hints at the possibility of an upcoming Argentinian development.

Last November, Trump’s company similarly received approval for two trademarks in Argentina, the first in the country since President Trump took office in 2017. CREW later discovered that these fell under international trademark classifications that include real estate affairs and building construction.

But the president’s sons, who run his business, have said that they would return to international expansion once the president leaves office. Donald Trump Jr. has even identified a country, India, the Trump Organization might want to expand in “post politics.” The new trademarks suggest that Argentina might also be on this list. If so, it creates a massive conflict of interest when it comes to American foreign relations with Argentina.

Trump may have already altered U.S. foreign policy in Argentina to receive last year’s trademarks. The application and registration dates of the November 2019 trademarks show that they coincide with the Trump administration’s action on tariffs on Argentina. Trump’s business applied for the trademarks in December 2017. Shortly after the trademark opposition period ended in April 2018, the Trump administration lifted tariffs on steel and aluminum in Argentina. Once the trademarks were officially granted to his company in November of last year, Trump announced that he would reinstate the tariffs.

Plans to build a Trump tower in Argentina predate Trump’s time in office, but these plans have not yet come to fruition. Shortly after Trump’s election in 2016, an Argentinian journalist reported that President-elect Trump lobbied then-Argentinian president Mauricio Macri to allow the construction of a Trump Tower in Buenos Aires. Trump has a history doing business with Macri’s father. The project’s would-be developer, YY Development Group, reportedly facilitated a phone call between Trump Organization’s executive vice-president Eric Trump and Argentina’s then-foreign minister. Days after Trump’s call with Macri, YY Development announced that the project could begin during Summer 2017. But development has yet to begin.

Since Trump became president at least 66 foreign trademarks have been granted to Trump businesses. Each poses a conflict of interest for President Trump and American foreign policy. The new Argentina trademark adds to this problem, and shows just how meaningless Trump’s ethics promises have proven to be. 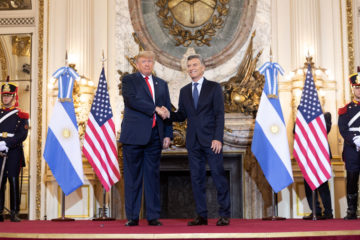 US Held Off on Tariffs while Argentina Reviewed Trump Trademarks

Trump's Argentina trademarks are not the first time that the Trump family’s trademarks ran up against American foreign policy.