In the face of mounting investigations and reports of malfeasance on the part of President Trump’s inaugural committee, officials tied to the organization have long relied on claims that a full “clean” audit was conducted on its finances. Yet, despite numerous press requests over nearly two years, the committee has never publicly disclosed the audit.

New documents obtained by CREW, however, appear to contain the audit that the committee’s spokespeople have been leaning on, and far from offering a comprehensive picture of the committee’s financial integrity, the document offers almost no new details about how the inauguration spent its record haul.

The document does show, however, that in addition to being the target of intense scrutiny by investigators and regulators at the state and federal level, the President’s inaugural committee was embroiled in a previously unreported legal dispute in 2017 with an unnamed event planner.

A heavy lift for a thin audit

Every presidential inauguration has a committee that raises money from donors to pay for the galas and other ritzy events that surround the presidential swearing in, but none in recent memory have raised such numerous legal and ethical questions as Trump’s. The committee has been the subject of intense scrutiny ever since its first filings showed that his conspicuously under-attended inauguration nevertheless spent more money than both of President Obama’s inaugurations combined, a binge that was fueled in part by secretive donors who remain anonymous to this day.

Unlike its predecessors, Trump’s inaugural committee has become ensnared in numerous investigations and legal matters. Federal prosecutors in two separate New York districts have reportedly opened probes into the committee: One looking into its spending and possible illegal donations and another looking at committee chairman Tom Barrack’s ties to the Middle East. Both matters are overseen by United States Attorneys appointed by President Trump.

Meanwhile, the Department of Justice’s public integrity section is reportedly investigating one of the committee’s top fundraisers for possibly using his access to boost his businesses. And last year, in the trial of President Trump’s former campaign chairman Paul Manafort, a high-level inauguration official and Manafort protege, Rick Gates, admitted that he may have siphoned off some of the committee’s money for personal use.

At the state and local level, attorneys general in New Jersey and Washington, D.C. have opened probes into possible foreign donors to the inauguration and alleged self-dealing on the part of Trump’s children and his businesses.

Amidst this overwhelming scrutiny, spokespeople for the inaugural committee have repeatedly pointed out that the organization’s finances were subjected to an audit that gave the committee a clean bill of health. For example, in a report about questions surrounding the committee’s charitable contributions, the Associated Press quoted Tom Barrack saying, in June 2017, that “a full and clean external audit has been conducted and completed.”

Then, in separate statements to NBC and reporters from ProPublica and WNYC last December, in response to stories about possible misuse of funds and alleged self-dealing, the inaugural committee again said its “finances were fully audited internally and independently and are fully accounted.” And later in January, responding to a story about the inauguration’s exorbitant spending and payments to Trump’s D.C. hotel, Barrack told the New York Times that the committee’s finances “were fully audited internally and independently.”

These statements from committee spokespeople seem to imply that the audit of the inaugural committee’s finances effectively negated the allegations of financial impropriety they were responding to. Yet, when asked to provide the audit, they never would, and the document obtained by CREW suggests why: Because it doesn’t actually help them.

The audit, which was appended to an unsigned annual filing that the organization appears to have filed a year late with the New York attorney general’s charities bureau, is sparse. At just five pages, most of which is boilerplate accounting language, it is not a document that lays to rest the major questions that inaugural officials have spent nearly two years implying that it would.

That’s because the audit, which was concluded in June 2017—the same month that inauguration officials started making references to it in the press—is a very general assessment, simply checking to see if the committee’s own financial statements, which broadly categorize its receipts and disbursements, match its bank statements and other financial records.

Thus, while such an audit will show, in general terms, that a group received and spent as much as it says it did, it can’t reasonably be marshalled as support against allegations that donors fueling those receipts were given special access or that specific funds were misspent. Yet last December, in responding to a Wall Street Journal report that described criminal investigations looking into those very claims, Barrack reportedly referenced the audit.

Similarly, while an audit of this kind can verify that payments to President Trump’s own D.C. hotel are fairly represented in the group’s financial statement, it would not assess the propriety of such self-dealing or whether the committee paid fair market rate. Yet, when contacted by ProPublica and WNYC regarding internal emails that showed concerns being raised about possible overcharging, a spokeswoman for the inaugural committee said its finances “were fully audited internally and independently and are fully accounted.”

In addition to not helping the committee fight off allegations of misconduct, the thin document does not appear to satisfy the New York statutes that required the form to be filed in the first place. In a note, the audit states that the financial statement provided by the inaugural committee was “not intended to be a presentation in conformity with generally accepted accounting principles.” In so stating—and without stating otherwise in their analysis—the audit is echoing, intentionally or not, precisely what New York state regulations require such groups provide, which is an “audit report containing the opinion that the financial statements are presented fairly in all material respects and in conformity with generally accepted accounting principles.”

To be clear, regulations aside, it is generally not all that unusual for an organization of this size to commission such a basic audit, according to past audits and experts consulted by CREW. For example, President George W. Bush’s second inaugural committee submitted a similar four-page audit to regulators in North Carolina in 2006.

But Trump’s inaugural committee is not your average organization or even a normal inaugural committee, and experts agreed that this audit does not carry the exculpatory weight that the inauguration’s representatives have long suggested it does. If they had actually wanted it to do so, they could have commissioned a more detailed audit. Otherwise, they could have avoided making repeated assertions that the audit bolstered their position.

Experts also noted a number of discrepancies between the audit and the organization’s federal tax documents, raising concerns about compliance. For one, the annual filing itself is unsigned. And even though the period covered by the filing only runs through October 2017, it wasn’t filed until March of 2019, nearly 17 months later—much longer than the four and half months mandated by the rules outlined in the filing instructions on the same document.

Looking deeper, the federal tax return filed by the inaugural committee—which was prepared by the same Texas firm that conducted the audit—states twice that no audit was conducted, even though the return was signed by one of the firm’s representatives in late January 2018, nearly eight months after the audit was completed.

When contacted by CREW, a representative of the New York attorney general’s charities bureau said that documents do have to be signed, but on the question of timing, noted that there are sometimes legitimate reasons why a particular organization would take longer to file than specifically stipulated in the rules. When asked about the mismatched dates of the audit and the return, the representative noted that the internal system showed the document being marked as “incomplete,” suggesting that discrepancies had already caught the attention of regulators.

Scant as it is, the audit does contain some new information. Notably, the final paragraph on the final page discloses that a lawsuit exists that was “brought against the Committee by a contracted event organizer seeking compensatory damages.”

While some tensions have been made public recently between the inaugural committee and its contractors, with at least one major contractor to the inauguration claiming that she was “thrown under the bus” by the White House after the payments made to her firm became public, it’s not clear which firm has actually brought the suit or what the nature of its claims against the committee are. The contractor is not identified, and the audit claims that the inaugural committee’s lawyers “believe the lawsuit is not viable on its merits and expect the case to be dismissed.” 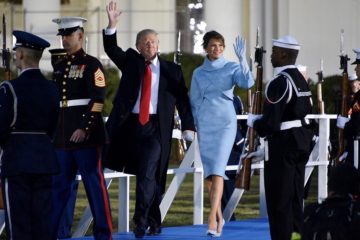 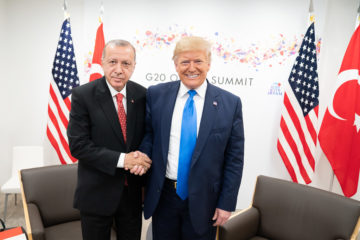 A GOP donor's son was granted access to political figures—including Trump. One beneficiary was a Turkish businessman with close ties to President Erdoğan.