Trump Claims He’d Never Use His Office to Promote His “Tremendous,” “Magnificent,” and “Incredible” Resorts

In terms of conflicts of interest, it’s been an incredibly busy time for President Trump. Between considering whether to hold next year’s G7 summit at his Doral resort, Attorney General William Barr’s planned holiday party at Trump International Hotel DC, Vice President Mike Pence’s stay at Doonbeg, and reports of military personnel frequenting Turnberry, Trump’s ties to the Trump Organization, which he still owns and profits from, have been all over the news.

At this year’s G7 summit in August, for example, the President utilized his platform to sell his Doral resort to the world. When a reporter questioned Trump’s motivations for hosting the G7 at one of his properties, Trump brushed off accusations that he may be trying to profit from the presidency by making the unsubstantiated claim that the office had cost him billions of dollars.  He then launched into a long advertisement for the property, unleashing a string of superlatives about the resort:

With Doral, we have a series of magnificent buildings; we call them bungalows. They each hold from 50 to 70 very luxurious rooms with magnificent views. We have incredible conference rooms, incredible restaurants…. And we have many hundreds of acres, so that in terms of parking, in terms of all of the things that you need, the ballrooms are among the biggest in Florida and the best. It’s brand new…. I think having it in Miami is fantastic. Really fantastic. Having it at that particular place, because of the way it’s set up, each country can have their own villa, or their own bungalow. And the bungalows, when I say, they have a lot of units in them. So I think it just works out well.

A few weeks later, Trump sang the praises of another of his properties when a reporter asked about his involvement in Pence’s stay at Doonbeg. Trump first responded by asserting he “had no involvement” in Pence’s decision before turning his defense against the conflict of interest claim into an ad for his resort. “It’s a great place,” he said. “It’s Doonbeg. I own it. It’s in Ireland. It’s beautiful. It’s wonderful.”

Then, unprompted, the president attempted to mitigate claims of his involvement by also bringing up Barr’s holiday party. After insisting that he had no influence over Barr’s choice of venue, he pivoted to talking about what a great choice it was:

I have a lot of hotels all over the place and people use them because they’re the best. I mean, you know, they’re the best…. And people like my product, what can I tell you? I can’t help it. But, you know. And I guess they say,”‘We want to stay at a place that’s better than someplace else.”

The pattern repeated itself a week later, after reports surfaced that United States military personnel stayed at Turnberry. This time, Trump took to Twitter to claim he “[knew] nothing” about “the crew staying overnight at Turnberry.” Again, however, he included a plug for the resort in the claim he wasn’t using his office to benefit it, adding to the tweet that those military personnel staying at Turnberry have “good taste!”

All of this recent praise from President Trump adds to an already startling tally of promotion. According to CREW’s tracking, President Trump has mentioned or promoted his businesses 186 times in less than three years in office. And he’s not alone: Members of his administration have touted Trump properties 72 times.

Even though he assured the public that he would separate himself from the Trump Organization before taking office, Trump has not only continued to own his properties, but has continued to act as their salesperson from the Oval Office. The G7 at Doral, Barr’s Party, Pence’s stay at Doonbeg, and military members at Turnberry are all egregious conflicts of interest in their own right, but Trump has exacerbated them by seizing the opportunity to draw promotional attention to his businesses. By doing so, Trump has only made concerns about the relationship between his administration and private businesses more legitimate. 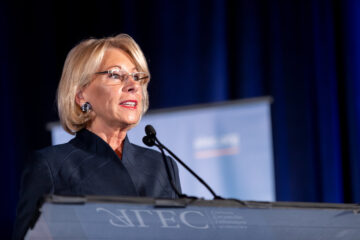 Betsy DeVos reported up to $100 million or more in income last year while serving as the Secretary of Education, according to a review of her personal financial disclosures. 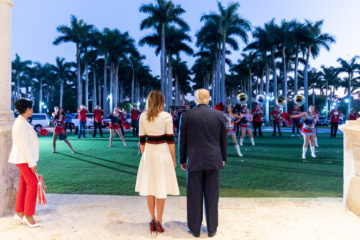 The Palm Beach County Board of Commissioners voted to grant a portion of President Trump's West Palm Beach golf resort a rent deferral. 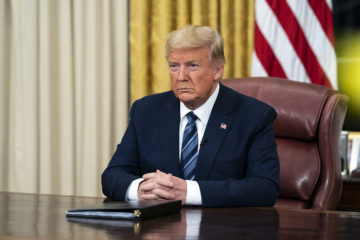