President Trump’s election marked the start of an ethics crisis in the United States government. The crisis began before President Trump even took office, when he decided to maintain his financial interests in the hundreds of privately owned businesses that operate under the umbrella of the Trump Organization. This decision represented the exact opposite of the approach of his modern predecessors, Republicans and Democrats, who took steps to eliminate financial holdings that could be vectors for possible corruption once they took office. The decision has resonated through his administration, creating constant risks that the President’s own decision-making will be affected by his financial interests; exposing thousands of federal government employees to corruption risks as they must interact with his businesses; and perhaps most importantly, setting a tone from the top that has allowed his unusually wealthy cabinet members and other senior appointees, such as his children, to ignore their own corruption risks.

President Trump’s disregard for rules and norms designed to protect against corruption has extended to nearly every part of our ethics system. It began with his inaugural committee raising millions of dollars from influence-seekers without being held accountable for how the money was spent and a dramatically broken transition process. It has extended into the administration, reflecting itself in nepotism in hiring, reversals on important transparency measures like White House visitor logs, and other steps dramatically increasing the risk that government decisions will be compromised by corruption, if they haven’t been already. The weaknesses in these systems predate President Trump, of course, and administrations of both parties have taken advantage of some or all of them in the past. We must acknowledge, however, that no administration of either party has pushed the boundaries of ethics as far as the Trump administration. That said, our long experience as government watchdogs has taught us that once the boundaries of ethical behavior are extended, they do not recede voluntarily, regardless of which party is in power. An open door invites any and all to walk through.

This report identifies several key presidential ethics problems that have arisen thus far in the Trump administration, explains why the system currently fails to prevent these problems, and describes recommended solutions. Some of these are major issues, such as President Trump’s failure to sell conflicting assets, and the obvious weaknesses in ethics enforcement within the executive branch. The solutions proposed also represent substantial, perhaps even radical, departures from the current system. Other problems are not as large and the solutions would not take us as far from where we are now. However, we believe even these smaller issues are important to our overall goal: a uniform strengthening of the ethics system.

We focus largely, although not exclusively, on solutions that involve action from Congress. We focus on Congress because one overarching lesson from President Trump’s assault on the ethics system is that many parts of that system have worked in the past because presidents wanted to avoid corruption risks; the system was designed to help them do that. We have now seen that it is risky to design a system that relies too heavily on this impulse from an executive. The checks and balances that are the cornerstone of our constitutional system must play a larger role in protecting Americans from corruption and its corrosive effects on their everyday lives; this is Congress’s power and its obligation.

Some of the proposed reforms include: 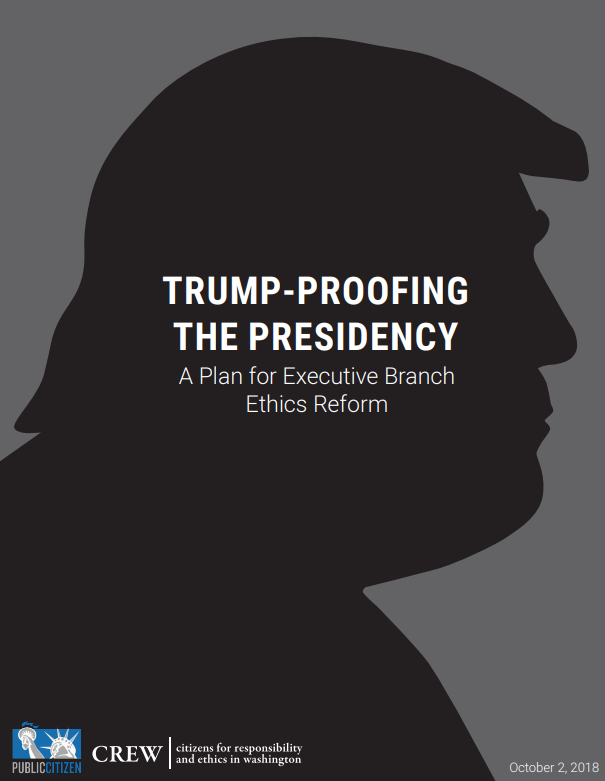