Trump said the Secret Service told him to stay at his hotel. There’s no record that’s true.

Yet again, the president used the Secret Service as an excuse for his profiteering, and yet again Secret Service records suggest he’s not telling the truth.

In February, President Trump traveled to the West Coast for a multi-day trip through four states. But instead of staying locally, President Trump traveled each evening to the Trump International Hotel in Las Vegas, likely costing taxpayers an extra million dollars. When he was asked about the wasteful and costly travel, President Trump blamed the Secret Service. “Largely, the schedule is set by the Secret Service. We do what they want us to,” he said. CREW sought records via Freedom of Information Act request that would verify this claim. Earlier this week, CREW received an email from the Department of Homeland Security saying no such records exist. While that doesn’t necessarily mean there were no communications about it, President Trump’s statements suggest there would be a record.

This is not the first time that he appears to have used the Secret Service to cover up an attempt to profit from his office. Last year, Trump aggressively asserted that the Secret Service chose his Doral resort as their prefered location for the 2020 G-7 Summit after months of looking at other options. In November, CREW received records that undermined Trump’s claim and illustrated that in reality, Doral was only added to the list of considered sites at the last minute and was viewed by the Secret Service as presenting challenges.

After his acquittal by Senate Republicans in his impeachment trial in February, Trump took a four-day victory lap through Nevada, California, Colorado and Arizona, where he held rallies and fundraised for his reelection campaign. Despite having speaking engagements spread across the western states, the president flew back to Las Vegas on Air Force One each night to stay at the Trump International Hotel.

Trump has made similar detours to his properties during official travel; during two different trips to Europe, Trump stayed at his properties in Ireland and Scotland, even though they were far out of the way from his meetings in London, Helsinki, and France. In 2017 he visited his Hawaii hotel before departing for a trip to Asia.

Vice President Pence has taken a cue from Trump, and has also made detours to Trump properties during his official travel. Last September, on a trip to Dublin Pence stayed at Trump’s Doonbeg resort–across the country from his meetings. The inconvenient logistics cost taxpayers $600,000 in limo fees, not to mention, the $15.000 it cost to put the Secret Service up in the resort.

On February 24, CREW requested records from the Department of Homeland Security, which the Secret Service is part of, that “relate to or support Trump’s assertion that the Secret Service wanted him to stay at the Trump International Hotel Las Vegas during his trip to western states.” This week, the agency responded that “no records were located” when they searched for responsive documents.

Those trips generate income for Trump, who still owns and profits from Trump Organization’s businesses while serving as president. It’s one of many ways that he’s sought to use the presidency to advance his businesses and personally profit. This new response from the Secret Service shows that Trump is using the government agency that is tasked with keeping him safe to provide a thin (and dubious) cover for his profiteering. Again. 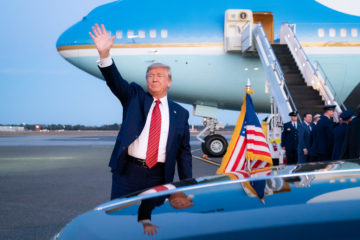