Today, CREW filed a complaint with the IRS against Independence and Freedom Network, Inc, a nonprofit organization that appears to have falsely told the IRS it had no more than $50,000 in revenue during a time period when the group contributed $850,000 to a super PAC. The lawyer who set up the group has established many other entities, some of which have been involved in funneling untraceable money into politics, and one of which has already been the subject of a CREW complaint.

Groups like Independence and Freedom Network that are organized under section 501(c)(4) of the tax code can raise and spend millions of dollars on political activity without disclosing their donors, which is why they are often referred to as dark money groups. They are not, however, allowed to have influencing elections be their primary activity.

Little is known about Independence and Freedom Network beyond the nearly 1 million dollars the group gave to Onward Ohio, a federal super PAC that spent in an Ohio state race. As the Cleveland Plain Dealer’s Andrew Tobias noted last year, “Google, the search engine, registers no results for the Independence and Freedom Network other than its incorporation articles, or news articles or social media posts about the newly uncovered March donation.”

Independence and Freedom Network was established in Ohio by a lawyer named James G. Ryan who works in the Columbus, Ohio office of the firm Bailey Cavalieri. A review by CREW of entities incorporated by Ryan since 2017 reveals that at least six additional nonprofit corporations incorporated by him can be tied to anonymous political spending. Public records do not indicate what role, if any, Ryan had with the nonprofits beyond filing their incorporation paperwork.

Independence and Freedom Network’s $850,000 contribution to Onward Ohio boosted the super PAC’s efforts to support then-Lt. Gov. Mary Taylor in Ohio’s 2018 Republican gubernatorial primary while keeping the ultimate source of the money secret. The practice of obscuring the true source of a contribution by using groups like nonprofits, which are not required to disclose their own donors, to make contributions to super PACs is known as dead end disclosure.

Yet when Independence and Freedom Network filed its tax return for its first year of existence, covering May 1, 2017 through April 30, 2018, it filed a short form return and claimed it didn’t raise more than $50,000. The discrepancy between the super PAC’s report to the Federal Election Commission (FEC) of the $850,000 contribution and the nonprofit’s report to the IRS that it hadn’t raised enough money to make the contribution is at the root of the IRS complaint CREW filed today.

Independence and Freedom Network is the second group set up by Ryan that CREW has filed a complaint against related to anonymously-sourced super PAC contributions. Last year, CREW filed a complaint with the FEC against LZP, LLC, a domestic nonprofit limited liability company incorporated by Ryan, and Honor and Principles PAC, a super PAC the group funded, for an apparent conduit contribution scheme.

LZP, LLC was incorporated by Ryan in Ohio on March 27, 2018. One day later, the new corporate entity contributed $175,000 to Honor and Principles PAC, a super PAC that first registered with the FEC just two days earlier on March 26, 2018. It is highly unlikely that LZP, LLC, which does not appear to conduct any business and does not have a presence on the Internet, was able to generate sufficient income to finance the contribution in the one day between its formation and its transfer to Honor and Principles PAC, suggesting someone else provided the money to make the donation.

On the day following the contribution, the super PAC spent $163,838 on attack ads in a state legislative race. LZP, LLC, the only ever donor to Honor and Principles PAC, later gave the super PAC an additional $95,000 during 2018.

On the same day that Ryan incorporated Independence and Freedom Network he also filed the paperwork for another nonprofit, American Exceptionalism Institute, Inc. The new group kept an extremely low profile until April 24, 2018 when Politico’s Eliana Johnson reported that “a dark money group” was launching a $100,000 ad campaign to pressure Sen. Rand Paul (R-KY) to support Gina Haspel’s nomination as director of the CIA.

The ad run by American Exceptionalism Institute suggested that Sen. Paul was representing the interests of al Qaeda terrorists rather than his Kentucky constituents with his opposition to Haspel. The group’s spokesman, Brian Kinnett, hit the same point, telling Politico that the aim was to remind Sen. Paul “to represent Kentucky’s interests in Congress, not the interests of Al Qaeda terrorists who launched a war against our country and then cried foul over treatment when they got caught by heroes like Haspel.”

Kinnett, who was described as “an Ohio-based conservative activist,” has his own history with secretly funded groups. He is the treasurer of Americans United for Values, a federal super PAC that has been largely funded by opaque nonprofits. He is also the president of A Public Voice, Inc., a nonprofit that regularly contributes to super PACs, including Americans United for Values, while keeping its own donors secret.

American Exceptionalism Institute received section 501(c)(4) tax-exempt status on February 22, 2018 with an effective date of April 13, 2017, according to a copy of the group’s application for tax-exempt status, which was recently obtained by CREW. According to the group’s fiscal year 2017 tax return, American Exceptionalism Institute raised $100,000 and spent $83,000 through April 30, 2018.

Soon before American Exceptionalism Institute started spending money to attack Sen. Paul, Ryan incorporated another group that would go on to pay for ads targeting a politician. On April 12, 2018, Ryan registered Next Policies, LLC as a domestic for-profit limited liability company in Ohio.

In November 2018, Next Policies began running an issue ad that was nominally supportive of Greg Orman, who was running as an independent in Kansas’ gubernatorial election. The group listed Ryan’s law firm’s Columbus, OH office address as its address on ad purchasing forms.

Another group registered by Ryan called Women’s Action Fund, LLC popped up in an Oregon state Senate race just before Election Day. Ryan incorporated the domestic nonprofit limited liability company in Ohio on October 9, 2018. By the end of the month, the group was out with an attack ad against a Democratic candidate named Jeff Golden. Women’s Action Fund also hosted an attack website against Golden called TheRealJeffGolden.com.

According to Oregon campaign finance records, the group spent about $22,000 attacking Golden.

About a month after Election Day, on December 12, 2018, Ryan incorporated two entities in Ohio that suggest more anonymous spending may be coming to future elections. Both of the new domestic nonprofit limited liability companies set up by Ryan appear to have ties to super PACs, at least nominally.

Security is Strength, LLC shares a name with a super PAC, Security is Strength PAC, that supported Sen. Lindsey Graham (R-SC) in the 2016 Republican presidential primary as well as former Sen. Kelly Ayotte (R-NH) in her failed re-election campaign. In the 2016 election cycle, the super PAC received hundreds of thousands in ultimately secret money from nonprofits that don’t reveal their donors. 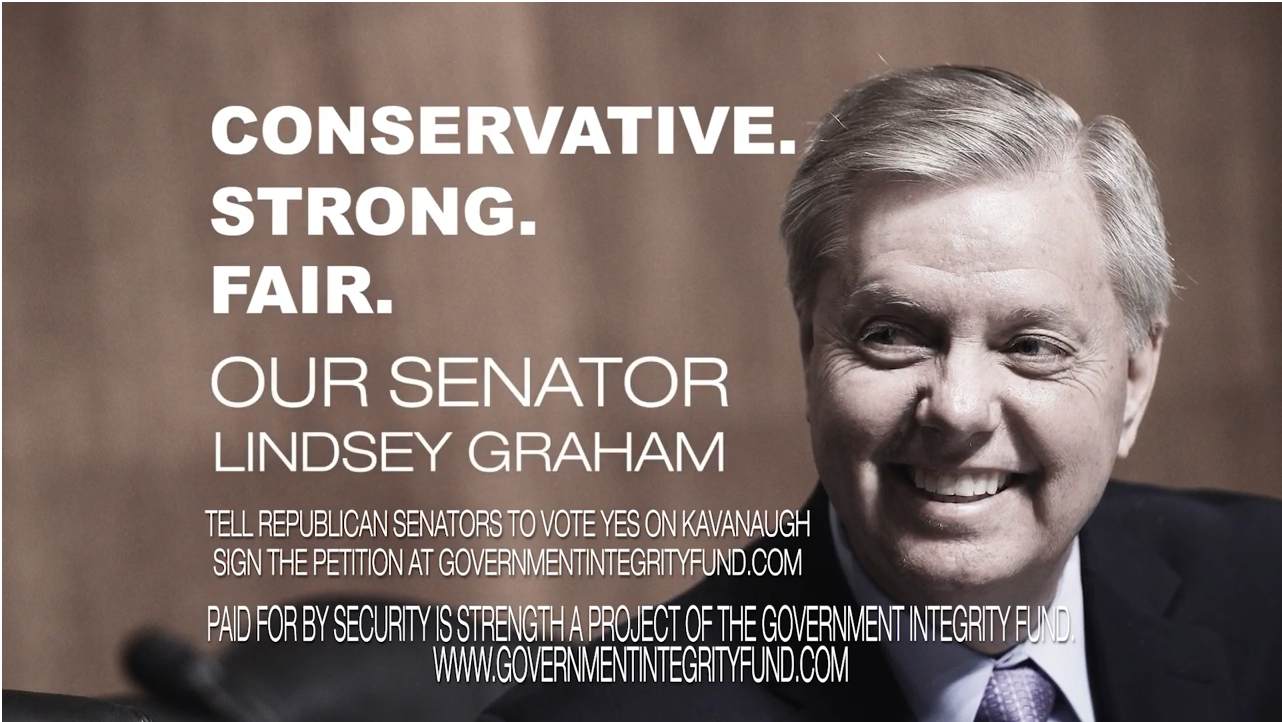 The other prospectively political entity set up by Ryan in mid-December 2018 is called Securing Louisiana’s Future, LLC, which is a domestic nonprofit limited liability company. Six days before Ryan set up the LLC, Joel Riter, a political operative known for his work with dark money groups and super PACs, registered a super PAC with the FEC that has essentially the same name, Securing Louisiana’s Future. A month later, Riter filed a statement of organization for the PAC with the state of Louisiana.

According to the super PAC’s website, the group is supporting U.S. Rep. Ralph Abraham (R-LA) in the Louisiana gubernatorial election. Securing Louisiana’s Future’s efforts are reportedly being run by Brett Buerck, the CEO of Majority Strategies, who claimed in February that the super PAC had already raised “hundreds of thousands of dollars.”

It is unclear what the LLC’s relationship is to the similarly named super PAC. When the super PAC filed its first disclosure report with the Louisiana Board of Ethics in April 2019, it disclosed a little more than $90,000 in funding. The similarly named LLC was not among the reported donors. The super PAC did, however, receive a contribution from a non-disclosing nonprofit called Citizens for a Working America. Joel Riter, the super PAC’s treasurer, is the president of Citizens for a Working America.