New Interior Watchdog is a Trump Donor with Another IG Job

When the agencies that are supposed to protect the environment are led by former lobbyists and scandal-plagued agency heads, the importance of independent watchdogs cannot be overstated. President Trump has not made filling Inspector General (IG) vacancies a priority–which became especially obvious with his quiet appointment of Gail Ennis, a political supporter of his, to act simultaneously as Social Security Administration (SSA) IG and Interior IG. Appointing one person to lead oversight of two agencies puts an enormous strain on both Inspector General offices and illustrates the absence of ethics and accountability that is typical of the Trump administration. Given the ethics scandals of Interior Secretary Bernhardt and his predecessor, the Interior Department needs an IG of its own.

Interior has been without a permanent IG since early in the Obama Administration, but is currently one of the 11 agencies in the Trump Administration with an IG vacancy. IGs are independent watchdogs tasked with investigating management of government agencies and promoting accountability. Allowing these positions to be filled by Acting IGs for months or years at a time raises serious questions about oversight of these agencies.

In January, the Trump administration announced its intent to nominate Mark Lee Greenblatt to lead the Interior Department’s Office of Inspector General. Despite Greenblatt’s nomination advancing through the Senate with bipartisan support, The Hill reported that the Trump Administration quietly appointed Ennis, the IG of the SSA to also serve as the Acting IG for Interior–a role she has held without Senate confirmation since May 28, 2019. Her appointment was never formally announced by the White House, and went unnoticed for weeks.

Ennis is a problematic choice for many reasons, including her political donations to Trump’s election and re-election efforts. Beginning the day after Donald Trump became the Republican nominee for president, Ennis donated thousands of dollars to the Trump Make America Great Again Committee, the Republican National Committee and Donald Trump’s campaign. Her donations stopped in August 2017, two months before her nomination for SSA IG. While IGs are allowed to make political donations, they are appointed to act as independent and nonpartisan watchdogs. Ennis’ substantial donations before and after Trump’s election raise questions about her impartiality in a role where it is paramount.

Ennis also was not a natural pick to head the Interior OIG. First, she was confirmed to lead SSA’s OIG office only five months ago. Second, before her appointment to SSA, Ennis was a partner at WilmerHale, which lobbies on behalf of organizations with business before Interior. Ennis told reporters that even as she heads the OIG, the General Counsel is conducting a “thorough ethics review” to ensure that she does not participate in any matter that would create a conflict of interest or an appearance of a conflict of interest.

The role of Interior IG holds outsized importance because Trump-appointed Interior leaders have been so ethically catastrophic. Former Secretary Ryan Zinke resigned after a year in the position, in part due to the 18 federal investigations into his conduct, with scandals ranging from meetings with lobbyists, to shady business dealings, to a recently revealed Hatch Act violation. Zinke’s replacement, David Bernhardt, has followed his bad example only months into his appointment as Secretary. His meetings with former clients have already resulted in multiple complaints, and just last month, CREW filed a complaint against his office with OIG to investigate the systematic deleting of Bernhardt’s schedule–a federal record that legally must be preserved.

Allowing Ennis to serve as the IG for an agency with such ethically-challenged leadership–despite her own ongoing ethics questions–compromises the integrity of the Interior Department. Even if there were no ethical questions related to her appointment, the role is too important to be filled by someone splitting their time between two agencies. Independent oversight is the job of an IG, and is one that Ennis cannot fill effectively at the Department of Interior if she has potential conflicts of interest and is overseeing another critical agency. 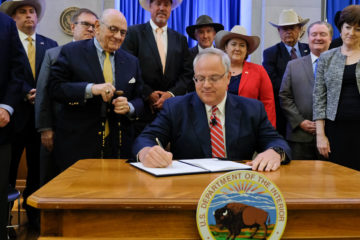