Does the Vice President’s Chief of Staff Have a Coronavirus Conflict of Interest?

Based on CREW’s review of his public financial disclosures, there is reason to be concerned that Vice President Pence’s Chief of Staff, Marc Short, may be participating in the government’s coronavirus pandemic response while holding significant conflicting financial interests.

As Chief of Staff, Short manages the staff of the Vice President’s office. But the financial disclosure report he filed when he entered government in March 2019 shows he may own stocks in companies directly affected by the pandemic response that the Vice President’s office is leading. The companies whose stocks he listed in his disclosure include manufacturers of drugs, medical tests, medical devices, medical instruments, personal protective equipment, cleaning supplies, antiseptics, airplanes, and airplane parts. They also include a major consumer goods retailer, the parent company of Google, and for-profit managed healthcare companies.

Not knowing whether Short divested leaves the public having to question whether the Vice President’s office is focused on the best interests of all Americans or on the private interests of its Chief of Staff. At a time when the effectiveness of government is a matter of life and death, the fact that we even have to wonder is a problem.

Short is on his second stint in the Trump administration. He entered government with the first wave of Trump appointees on January 20, 2017, as White House Director of Legislative Affairs. He left government in July 2018, but his return to private life was short-lived. He rejoined the administration to lead Vice President Pence’s office on March 11, 2019.

The precise nature of Short’s role in the pandemic response is not entirely clear, but there is ample evidence of his participation in it. Vice President Pence addressed the federal government’s coronavirus response in a January 27, 2020, speech. A few days later, on February  4, 2020, Short personally spoke to reporters about the administration’s coronavirus response. The Vice President has also said he participated in a February 6, 2020, meeting with the Centers for Disease Control regarding the coronavirus, and he assumed leadership of the coronavirus taskforce on February 26, 2020. Short reportedly determines the agenda for meetings of the coronavirus task force, as would be expected of someone in the role of Chief of Staff to the Vice President.

Short’s role has not been limited to arranging these meetings. In one press briefing, he spoke with reporters about logistical arrangements for distributing supplies, including personal protective equipment for medical professionals. He also appears to have been involved in economic aspects of the government’s response. The Washington Post reported that he has been actively pushing President Trump “to reopen the economy.”

Short was also reportedly responsible for pulling presidential advisor Jared Kushner into a separate coronavirus effort. Dubbed the “shadow task force,” the group’s activities initially created confusion among senior government officials over its authority in relation to the Vice President’s task force, with some saying that they “do not know who is in charge and whether Pence’s team has been sidelined.” The team reportedly includes members from the private sector and is engaged in, as Kushner is quoted as saying, “an entrepreneurial approach.” (CREW has previously written about this shadow taskforce.)

In an interview with Fox News host Lou Dobbs last month, Short discussed Vice President Pence’s trip to meet with executives of 3M Company—one of the businesses whose stock Short reported in his financial disclosure report. During the interview, Short highlighted a related legislative effort to enact product liability protection for 3M Company and other manufacturers involved in the coronavirus response: “The Vice President worked with several Democrat governors who leaned on Democrats in Congress, and it was included in the most recent bill that went through.” In the interview, he also discussed the challenge of developing a vaccine, efforts to develop therapeutic drugs, and concerns about the availability of personal protective equipment for medical professionals. These issues could impact the companies whose stocks he reported owning in his new employee financial disclosure report.

Short filed that financial disclosure report on April 9, 2019, a few weeks after joining the Vice President’s office. It was revised on a total of 19 different dates during successive reviews by the White House and the Office of Government Ethics (OGE), which dragged into 2020. OGE certified his financial disclosure report on March 10, 2020—a day shy of his one-year anniversary in the job.

The revised report reveals a number of stock interests that, if retained, could pose conflicts of interest with the pandemic response. Due to statutory reporting requirements, the values of these stocks are reported in ranges: 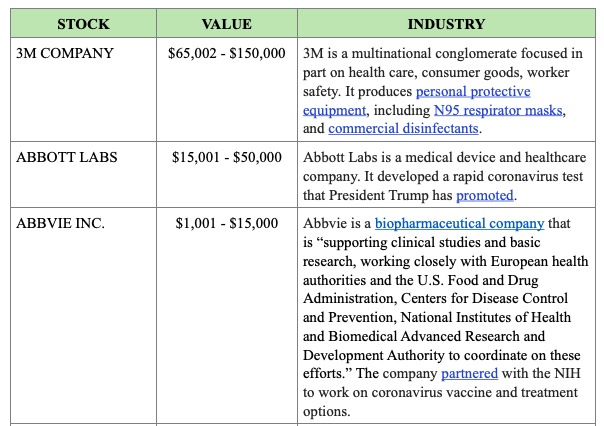 Click here to read the full table of his stocks that could pose a conflict of interest.

The government’s replies suggest that Short may not have sold stocks.

There are some possible explanations for the lack of periodic transaction reports showing Short sold these stocks. OGE and the White House are only required to release a periodic transaction report if they have had it for at least 30 days. Thus, it is possible that Short could have filed the report on or after March 24, 2020. But Short was required to disclose any sales of stocks exceeding $1,000 no later than 30 days after receiving notice of a completed sale—meaning that, for a report filed on March 24, 2020, or later to have met the deadline, the sale would have had to occur on or after February 23, 2020. It is possible that he could have received a maximum of two 45-day extensions, but even that would mean any sale could have occurred no earlier than November 25, 2019, if he met the deadline for filing a periodic transaction report on or after March 24, 2020. By then, Short had already been in government for over eight months.

It is also possible that he divested the stocks. That could be the case if Short failed to comply with the financial disclosure law and, instead, left the public in the dark about the resolution of any conflicts of interest. He also could have given the stocks away, which would not have triggered a requirement to file a periodic transaction report. Alternatively, the fault may lie with the White House if the officials who responded to CREW’s request failed on two different occasions to search the government’s electronic financial disclosure filing system for Short’s reports.

It may well be the case that one these scenarios occurred and Short no longer has the stocks. It may also be the case that Short has retained them. Thus far, CREW has been unable to obtain any record that he ever sold them.

The prospect of Short having retained these stocks is troubling because he is covered by the conflict of interest law applicable to executive branch employees, 18 U.S.C. § 208, which comes with potentially severe penalties. In certain circumstances, the government can grant employees waivers exempting them from the conflict of interest law, so CREW asked the White House whether it had granted Short a waiver. On April 16, 2020, the White House responded that it has posted all such waivers in a single location on its official website. Short was not listed on the website as having received a waiver as of that date. Short was still not listed on the website as of April 23, 2020.

Absent a waiver, the conflict of interest law would prohibit Short from participating personally and substantially in any “particular matter” directly and predictably affecting the financial interests of companies in which he owns stock over a certain value. OGE regulations define the term “particular matter” to include only matters that are “focused upon the interests of specific persons, or a discrete and identifiable class of persons.” The phrase “specific persons” can include a company, and the phrase “discrete and identifiable class of persons” can include an industry.

Government ethics regulations contain exemptions that allow executive branch employees to participate in particular matters if they own only small amounts of publicly traded stock. Those regulations define what qualifies as sufficiently small by setting maximum value thresholds for publicly traded stock that can qualify for the exemption. The amounts vary depending on whether a particular matter affects individual companies or a whole industry.

For this reason, it would be hard to say whether an employee violated the conflict of interest law without knowing the precise nature of a matter in which the employee participated. But there is enough information in this case to be concerned. In the absence of periodic transaction reports showing that Short divested his stocks, the public is left wondering if he has a conflict of interest with the government’s pandemic response. That’s cause enough to demand answers from the Vice President’s office.