Bill Barr is Conflicted on 1MDB, Is He Helping Goldman Sachs Get Off Easy?

Goldman Sachs is currently preparing to plead guilty to bribery and pay a fine for the bank’s involvement in one of the biggest financial crimes of all time. The problem is that both Attorney General William Barr and the head of the Justice Department’s Criminal Division, Brian Benczkowski, have a conflict of interest when it comes to the case: they used to work for Kirkland & Ellis, the law firm representing Goldman Sachs, and neither of them have recused from the matter. Now it looks like the bank will be getting off with a significantly smaller fine than they could have—up to $2 billion rather than the maximum of $9 billion some analysts predicted. American taxpayers are being represented by DOJ lawyers who recently worked for the firm representing the defense, and that conflict of interest could be costing taxpayers a huge amount of money.

Goldman Sachs had been bracing for a massive fine for overlooking corruption at 1Malaysia Development Berhad (1MDB) in order to pocket fees from their work with the Malaysian national investment fund. The bank even saved up more than a billion dollars last year in anticipation. The prediction of a large fine weighed on stock prices, and the bank undoubtedly had an interest in negotiating with DOJ to keep the fine as low as possible.

The Goldman Sachs fine is poised to make up a large portion of the overall settlements made with DOJ this year. In an interview with NPR last summer, Benczkowski said that recoveries from corporate resolutions with DOJ would be “well north” of $2 billion in 2019, about double the amount recovered in 2018. The fact that this new fine could equal or greatly surpass the recoveries made in the last two years makes the prospect of Barr and Benczkowski’s conflict even more concerning—this is no small case.

Barr has reportedly “directly immersed himself in the 1MDB case,” but in order to be involved, Barr had to get an ethics waiver because he previously worked at Kirkland Ellis. Barr got the waiver in April 2019, so that he could work on the “investigation and litigation on the 1MDB matter” despite his conflict of interest. The Office of Government Ethics released the waiver on its website, so the public would be aware of his involvement.

Brian Benczkowski, the Assistant Attorney General for the Department of Justice Criminal Division also got an ethics waiver to participate in the 1MDB case in November 2018. Not only that, but it looks like his ethics agreement was rewritten to make it seem like granting him ethics waivers would be routine rather than unusual. Including this one, he has already received three waivers during only a year and a half in government. 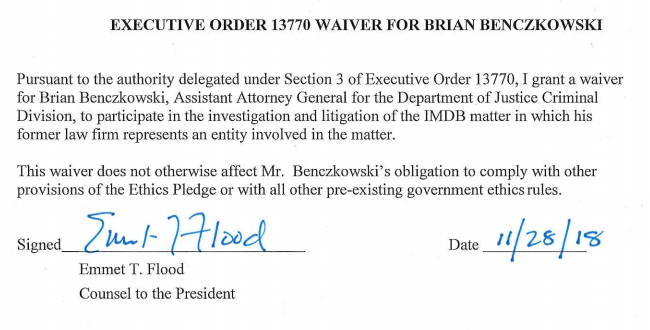 When President Trump first nominated Benczkowski to lead the Criminal Division in 2017, Benczkowski signed an ethics agreement that emphasized his need to recuse from matters involving Kirkland & Ellis. The agreement read: “For a period of one year after his resignation, he will not participate personally and substantially in any particular matter involving specific parties in which he knows the firm is a party or represents a party, unless he is first authorized to participate.” His nomination stalled in the Senate amid concerns about his ties to Russia’s Alfa Bank, but he was later confirmed in 2018. Rather than resubmitting his existing ethics agreement to the Senate after the nomination stalled, the Trump administration let Benczkowski sign a revised, looser ethics agreement that declared that he would “seek written authorization to participate in particular matters involving specific parties in which Kirkland & Ellis is a party or represents a party” whenever his personal involvement in a matter was considered critical to the “ability of the Criminal Division to carry out its mission.”

Benczkowski wasted no time in taking advantage of the looser language in his revised ethics agreement, receiving his first waiver on August 21, 2018, after a little over a month in government. He later received the 1MDB waiver on November 28, 2018 and in December 2019, he received a third waiver, which allows him to work on an unspecified “confidential criminal matter.”

Ethics waivers allow the public to scrutinize situations in which members of the government opt-out of normal ethics practices. In this case, DOJ has repeatedly waived the ethics rules for a law enforcement official whose job is to enforce rules against others, as well as for his boss, the Attorney General himself.

The fact that the fine was predicted to be so much higher than the deal DOJ is poised to cut with Goldman Sachs raises the important question of whether Barr and Benczkoski were influenced by their ties to the law firm defending Goldman Sachs. It’s not often that you can put a price on a conflict of interest, but maybe in this case we can. 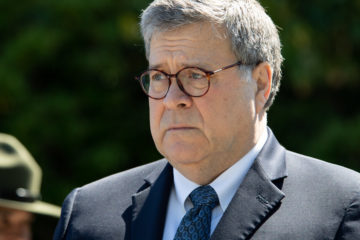 Even though Attorney General Barr postponed his $30,000 holiday party at Trump’s DC Hotel, any appearance of his impartiality had long since disappeared.