The Interior Department may have violated federal law by using taxpayer money to create what looks like a campaign ad for President Trump that focuses on the National Park Service.

The slick video, which includes an urgent musical score and dramatic images, purports to announce the passage of a new law related to national parks. But even that much is not entirely clear because the video never even identifies the law. Words on the screen quote enthusiastic reviews of the law, but viewers are never told what the new law is or requires. 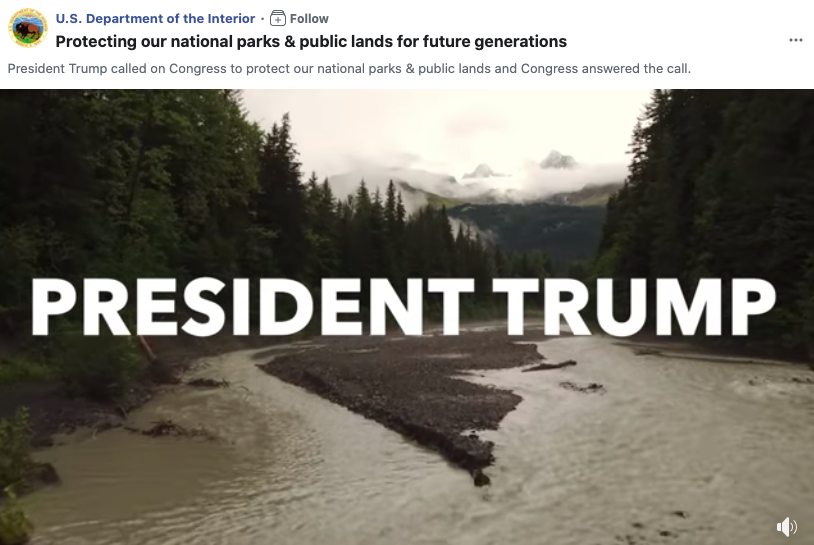 This Interior Department video seems to serve no governmental purpose whatsoever. It does not advertise a specific park, encourage Americans to visit national parks, describe an agency program, ask the public to take action, or contain educational material. What the video does do – all it does – is promote Trump.

The video credits Trump for getting Congress to pass the unidentified law. In fact, the words “PRESIDENT TRUMP” in all caps are the first words to appear on screen. The video asserts that Trump is a defender of national parks, and it features him standing before Mount Rushmore saluting. Later in the video, Trump stands before the Lincoln Memorial, and the screen cuts to the Air Force’s Thunderbirds flying in formation above. Also repeatedly appearing in the video is the first lady, who is shown hugging and talking to children.

The video’s central message appears to be: President Trump is good, and here are some fighter jets.

There can be no arguing that this video does anything other than aggrandize Trump. It serves no mission-related function of the National Park Service, which is a part of the Interior Department. The law it touts – which, again, it never names – has already been enacted, and no information is supplied about how the National Park Service will implement that law. This video is pure propaganda seemingly aimed at Trump’s reelection.

In addition to this general prohibition against using funds for unauthorized purposes, there is an express prohibition against propaganda. A provision of the law funding the government for 2020 specifically bars the use of appropriated funds for propaganda, unless expressly authorized by law. That provision, section 718 of the “Consolidated Appropriations Act, 2020” reads: “No part of any appropriation contained in this or any other Act shall be used directly or indirectly, including by private contractor, for publicity or propaganda purposes within the United States not heretofore authorized by Congress.” This section applies generally to the entire government – including the Interior Department, even though its funding comes from a different law, the “Further Consolidated Appropriations Act, 2020.”

Because appropriations law does not explicitly define “publicity or propaganda,” the Government Accountability Office (GAO) has provided guidance through a series of opinions. GAO is a legislative branch agency that, among other things, has responsibility for investigating potential violations of appropriations law by the executive branch. GAO has defined unauthorized “publicity or propaganda” as any activity that fits into one of the following three categories: covert communications, self-aggrandizement, and purely partisan activities.

The video clearly implicates the second category, self-aggrandizement, because its only real purpose is to tout President Trump. Self-aggrandizement occurs when federal appropriations are expended (whether through the payment of salaries, the use of federal resources, or other expenditures) to tout an individual or an agency. The prohibition against self-aggrandizement can be violated when the government creates materials emphasizing the importance of a particular individual, rather than publicly disseminating “information reasonably necessary to the proper administration of the laws for which an agency is responsible.”

The creation of propaganda can violate appropriations law. In one 2005 decision, GAO explained that the Office of National Drug Control Policy violated the publicity or propaganda prohibition in an annual appropriation by the Office of National Drug Control Policy, as well as the Anti-Deficiency Act. In 2015, GAO came to the same conclusion in another case involving the creation of unauthorized publicity or propaganda by the Environmental Protection Agency (EPA).

In 2018, GAO issued an opinion on what qualifies as “self aggrandizement” propaganda after members of Congress asked the GAO to investigate then-EPA Administrator Scott Pruitt for his appearance in a National Cattlemens’ Beef Association video. GAO explained: “In our view, these remarks [by then-Administrator Pruitt] do not constitute self-aggrandizement because, although [he] presented information about EPA’s role and encouraged public participation in the rulemaking process, he did not attempt to persuade the public of his own importance or of EPA’s importance as a government agency.”

While GAO found no violation in that case, its opinion makes the case that materials touting the importance of a person or agency amount to propaganda. GAO excused Pruitt’s conduct because he “encouraged public participation in the rulemaking process.” In contrast, the Interior Department’s recent National Park Service video appears to serve only to encourage appreciation of Trump. Its sole function seems to be persuading the public that he personally led the passage of legislation to support national parks. The video takes a retrospective look at Trump’s role and is devoid of information about any ongoing efforts to implement the legislation. It touts Trump as the leader who “called on Congress” to pass the law, and it features a display of military might normally associated with authoritarian leaders. None of this content has anything to do with the mission or ongoing work of the National Park Service.

In theory, the National Park Service video may also implicate the third category of unauthorized “publicity or propaganda,” which covers purely partisan activities. But GAO has interpreted that category very narrowly. The images and references to national parks in the video might be just enough mission-related content for the Interior Department and the National Park Service to wriggle out of a determination that the video fits neatly in this other category.

After the Interior Department violated the law by creating this national parks video for Trump, he made an ostentatious show of donating his salary to that agency. This political stunt creates the appearance of rewarding the National Park Service for Interior Department’s apparently lawbreaking video. And Trump is hardly sacrificing to make this donation. As CREW has repeatedly emphasized, he has abused his position to drive revenue to his businesses and has frequently used the bully pulpit to promote his properties. This profiteering has been worth far more than his presidential salary.

The leaders of the Interior Department and the National Park Service appear to be complicit in the creation of this virtual campaign ad for President Trump. Congress and the Department of the Interior’s Inspector General need to get to the bottom of how safeguards against the misuse of appropriated funds failed so badly in this case. Those responsible should face appropriate disciplinary action.

Federal agencies must not be allowed to create more illegal propaganda videos like this one. Not only is it a misuse of taxpayer money, it seems part of a broader effort by Trump to abuse his power to influence the election. 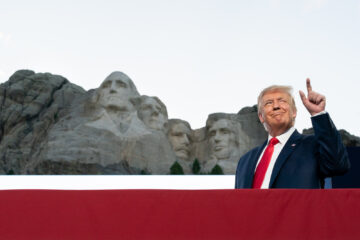 It’s Not Just USPS: Trump is Hijacking the Park Service to Boost His Re-Election, Too

President Trump’s corruption of the park service goes beyond policy reversals and fireworks spectacles, and extends into outright propaganda.